ThinkLite was selected by Bogota and Tenafly Racquet Clubs for its proprietary technologies, including driverless LED tube design as well as its unique LED Pod retrofit for indirect metal halide fixtures. 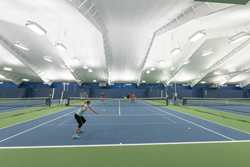 “The ThinkLite LED lamps were so effective that we reduced the total number of lamps needed to effectively illuminate the clubs by 30%.” Ogden Nikolovski, General Manager

CourtSense is committed to providing its members and students an exceptional tennis environment, paying special attention to features that can improve the quality of the game. Lighting plays a great role in this and CourtSense has always sought to have the absolute best lighting on its courts.

“In reality, we have always had great lighting,” said Ognen Nikolovski, General Manager. “What we did not have was an efficient and environmentally sound way to deliver great light.”

The company first began looking at new efficient and sustainable lighting technology for its courts in 2012, only to be disappointed by the available options. In 2015, Michael Andersen, ThinkLite's North American Vice President of Sales approached the team at CourtSense with the company’s new driverless LED tubes and custom-fit LED Pods.

“CourtSense was already familiar with LED options, so when we presented our technology, they recognized it was head and shoulders above anything else,” said Andersen.

First, with the LED tubes, the exclusive driverless design eliminates the need for any LED driver. Drivers generate significant heat, which can limit the lighting output, as measured by lumens per watt (LPW). Traditional LED tubes generate approximately 90 LPW. ThinkLite driverless tubes generate an industry leading 131 LPW, providing light levels on par with a brand new fluorescent tube, but without the immediate output degradation. In fact, ThinkLite tubes have an average lifespan of ten years and experience only about 5% degradation over the life of the lamp.

“The ThinkLite LED lamps were so effective that we reduced the total number of lamps needed to effectively illuminate the clubs by 30%,” said Nikolovski.

Another real breakthrough innovation is ThinkLite’s ability to retrofit existing metal halide indirect fixtures with its custom-fit LED Pods. “We did not have to replace any fixtures with the ThinkLite solutions. This resulted in huge savings for us and we were able to complete the installation without much disruption to our members. Keeping the old fixtures is a great differentiator for ThinkLite and reinforces our green commitment as we are not retiring old fixtures to landfills to go with efficient LED,” said Nikolovski.

Combining the outcome at the Bogota Racquet Club and the Tenafly Racquet Club, energy consumption for lighting was reduced by approximately 60% resulting in a projected saving of more than 495,000 kWh (kilowatt hours) per year. This is the equivalent to removing approximately 50 cars from the roads each year.

“In addition to the energy savings, the labor required to replace traditional lamps and ballasts is eliminated, as well as the need to take courts out of service to replace failed lights. This has a huge long term bottom-line impact,” added Andersen.

Once the retrofit was complete, CourtSense asked its members to provide their impressions on the improved court lighting. They were very pleased with the responses, including:

“A detectable and significant enhancement. I also appreciate the reduced energy usage.”

“The lights are fantastic! It is very similar to playing outdoors.”

“I love that they are eco-conscious. All-in-all bright and positive!”

“I love the new lighting system. And the fact that they are eco-friendly is a double positive.”