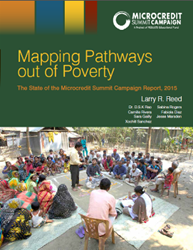 The 17th annual survey of the global microfinance industry

The Microcredit Summit Campaign released its 17th annual survey of the global microfinance industry December 9th at the Inclusive Finance India Summit held in New Delhi, India. Campaign Director Larry Reed featured the publication, "Mapping Pathways out of Poverty: The State of the Microcredit Summit Campaign Report, 2015," in his presentation on Wednesday to attendees of India’s premier financial inclusion conference.

According to the report, the global microfinance community reached 211 million borrowers in 2013, 114 million of whom were living in extreme poverty (households living on less than $1.90 per day, PPP). While the microfinance community provided loans to the most clients since the Microcredit Summit Campaign began tracking this number in 1997, the number of poorest clients fell for the third straight year.

The report underscores that the challenge microfinance faces in realizing its original goal -- to alleviate poverty by providing quality microfinance services to the poorest segments of society. The authors of the report warn that "if financial services are meant to play an important part in bringing an end to extreme poverty [by 2030 as asserted by the World Bank], we will not come close to reaching it" without engaging in interventions that meet this challenge head-on.

In a feature box about Colombia’s conditional cash-transfer (CCT) program, Mariana Escobar says, "Our strategy is to build productive capacities and help beneficiaries accumulate productive assets because the money alone is not enough. We are doing this through financial inclusion, financial education, and microinsurance products, and we coordinate the CCTs with livelihood programs." Working in collaboration with governments, NGOs, and businesses, microfinance providers can also help vulnerable families build resilience with these six pathways.

Regarding the power of combining interventions from these six pathways, Reed said in New Delhi "We saw this firsthand last year visiting Ethiopia’s Productive Safety Net Program (PSNP), a program designed to tackle the recurring droughts that killed over a million Ethiopians. PSNP provides food security for families in drought-prone areas, while also returning arid land to productivity and improving agricultural output. The program incorporates five of the six pathways (with a digital finance pilot), and the role that Dedebit, a local microfinance institution, plays is integral to bringing resilience to both the land and its people." PSNP reaches more than 8 million people and has been credited with helping to reduce Ethiopia’s extreme poverty rate from 56 percent to 31 percent since 2000.

The Microcredit Summit Campaign, in partnership with the Arab Gulf Programme for Development (AGFUND), will host the 18th Microcredit Summit: Frontier Innovations in Financial Inclusion in Abu Dhabi, U.A.E., on March 15-17, 2016. The Summit agenda will engage delegates in a thoughtful discussion around effective ways to reach the most vulnerable and marginalized and the microfinance services and financial inclusion strategies that promote inclusive, sustainable economic growth and social empowerment that helps improve their lives.

The Microcredit Summit Campaign, a project of RESULTS Educational Fund, is a global network of institutions and individuals involved in microfinance and is committed to expanding microfinance to the world’s poorest families and helping them lift themselves out of extreme poverty. The Campaign convenes microfinance actors to promote best practices, to stimulate the exchange of knowledge, and to work towards alleviating world poverty through innovations in microfinance.