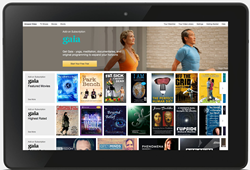 Gaia availability through Amazon is more evidence that conscious-living and mindfulness are becoming mainstream.

“Gaia’s programming serves as a guide to personal transformations, so the ability to reach millions of people through Amazon’s Streaming Partners Program is an exciting opportunity for us,” said Brad Warkins, Gaia president. “It’s more evidence that conscious-living and mindfulness are becoming mainstream.”

Gaia recently launched as a native app on the new Apple TV in November of this year, complete with a company rebrand from Gaiam TV to Gaia.

Along with Gaia, Amazon launched the Streaming Partners Program with providers such as SHOWTIME, STARZ, A+E (Lifetime Movie Club) and AMC (Shudder and SundanceNow Doc Club).

The timing of the Amazon’s Streaming Partners Program launch with Gaia offers members unlimited streaming of transformative content to share with friends and family during the holidays. For less than $10 per month, Gaia will help members kick-off 2016 with custom-curated guides to inspire a year of balanced living.