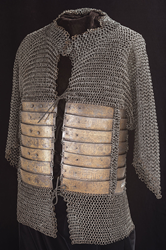 A shirt of Egyptian armor incorporating gold inlaid plates sold for $2.3M at Rock Island Auction Company’s 2015 December Premiere Firearms Auction. Dating to the 15th century, the armor is attributed to popular military powerhouse and architectural patron Qaitbay, Sultan of Egypt. The shirt had a conservative high estimate of $500,000 and sold to a unnamed institution in the U.S.

“We are thrilled with the results of this auction, and especially with the historic armor,” said Owner and President Patrick Hogan. “These strong results provided yet another record-breaking year for Rock Island Auction Company. We were able to surpass $51 million in annual sales, something no other firearms auction house has approached, and maintained our place as the #1 firearms auction house in the world for a twelfth straight year. This also has immensely positive implications for the growth of firearm collecting as a whole.”

The auction saw a realized total of over $14.7 million dollars, finishing 2015 with a flourish by drawing thousands of bidders from more than 21 countries. The $51 million in annual sales is the highest amount ever achieved for a firearms auction house. Other notable sales in the auction were a group of 19 historical Imperial German trophy mounts that sold separately for $420,612, and an engraved Winchester lever action rifle inlaid with gold that brought $207,000.

Back side 15th Century Shirt of Mail and Plate