In what The Lodge at Chaa Creek described as an early Christmas present, co-owner Mick Fleming was presented with a major award by the Belize Tourism Industry Association for “outstanding” contributions to Belize tourism. 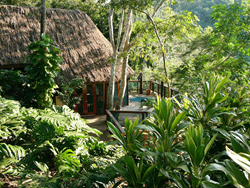 Belizean eco-resort The Lodge at Chaa Creek reports that it is ending the year on a high note after co-owner Mick Fleming was honoured with a special award at the Belize Tourism Industry Association’s (BTIA) December 2015 annual general meeting and 30th anniversary celebration.

“We’ve been receiving congratulations from not just within Belize, but from friends around the world since the awards were announced,” Chaa Creek marketing officer Lea Itzab said, “I think the response has been almost as gratifying as the award itself,” she added.

The award, presented at a cocktail celebration prior to the December 2 2015 annual general meeting, was given “to honor outstanding members, pioneers and sponsors who were actively involved in the growth and development of the BTIA and the tourism industry of Belize,” according to the association.

Mr Fleming, who with his wife Lucy founded The Lodge at Chaa Creek in the 1981, is recognised as one of Belize’s early eco-tourism pioneers. Also known as a dedicated environmentalist and organic farmer, he has been credited with introducing a range of innovative practices within the industry, including incorporating educational attractions into Belizean eco tourism, Ms Itzab said.

Mr Fleming also helped bring fine dining to Western Belize through Chaa Creek’s onsite Mariposa restaurant and the Guava Limb Café in San Ignacio Town, which was recognised as “Belize’s 2015 Restaurant of the Year” by the Belize Tourism Board.

“Many of us have been impressed with how Mr Fleming has been able to turn his interests and passions into tangible benefits for Belize. When guests come to Chaa Creek they not only have a great vacation, they also get a chance to learn about Belize’s natural history, ancient Maya culture, traditional organic farming, medicinal plants and so many other things.

“We like to say that the Flemings were naturally reducing food miles and offering ‘farm to table’ dining well before we first heard those terms used,” Ms Itzab said.

Dr Dionne Chamberlain Miranda, Managing Director of Chamberlain Consulting, congratulated Mr Fleming after the presentation, saying “He gives selflessly in the Cayo community where he supports sports and every other community effort he possibly can.”

Ms Itzab said such sentiments are not uncommon.

“We’re always receiving compliments from guests, colleagues, student groups and other visitors who are impressed by Mr Fleming and what he’s achieved,” she said.

“And I know I speak for all of Chaa Creek’s staff and many people in Belize’s tourism industry that we think it’s great that he’s been formally recognised by the BTIA.

The Lodge at Chaa Creek is a multi award winning eco resort set within a 365-acre private nature reserve along the banks of the Macal River in Belize.