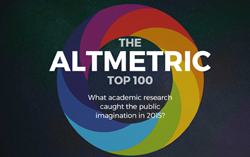 The top 100 ranking is determined by the volume of coverage each article has received in the mainstream media, as well as shares and comments on blogs, Wikipedia, social media platforms, and in scholarly spaces such as post-publication peer-review forums.

What academic research caught the public imagination in 2015? Altmetric today unveiled its annual Top 100 list of the most shared and discussed academic research of 2015. According to the list, the most popular paper of the year detailed the discovery of a new antibiotic that inhibits the growth of a range of drug-resistant bacteria, offering hope for efforts aimed at combatting antibiotic resistance which has seen a raft of media attention.

The other research that caught the public’s attention in 2015 is:

At number two, a topic that has always been known to generate widespread controversy also featured in the list: a major study confirmed there is no harmful association between the MMR vaccine and autism spectrum disorder (ASD), even among children already at higher risk for ASD.

Environmental issues made a big impact too; at number six an investigation into levels of plastic pollution revealed that there are more than five trillion plastic pieces, weighing over 250,000 tons, afloat in our oceans.

Showcasing advances in our understanding of creative talent another article, ranked at number nine, detailed an artificially intelligent program that detected individual artistic styles, such as that of Van Gogh, and can adapt a photograph to match that style.

An article highlighting an association between religion and selfishness in children, came in at number ten whilst a study at number 15 identified the negative effects on both the quality of sleep and next day concentration of the use of eReaders at night; which may prompt caution for those gifting eReaders this Christmas.

“Altmetric tracks what people are saying about academic research online to provide additional insights to publishers, authors, libraries and institutions. The annual top 100 ranking is determined by the volume of coverage each article has received in the mainstream media, as well as shares and comments on blogs, Wikipedia, social media platforms (including Twitter, Reddit and Facebook), and in scholarly spaces such as post-publication peer-review forums.”

The rise of open research

Open access content makes up nearly half of this year’s Top 100, with 42 of the articles included published under a gold open access license. Some of those same articles are from relatively recently launched journals Science Advances, Open Heart, and Royal Society Open Science - demonstrating the rapid and far-reaching dissemination of openly available content amongst online communities.

Amongst the articles included in the list some key themes stood out. Much of the research that drew high levels of media attention focussed on environmental issues such as public waste and climate change, as well as the earth’s changing ecology.

Medical and public health issues, as expected, also generated a lot of discussion and engagement amongst wider audiences - particularly those that related to a growing focus on the application of antibiotics, and those that looked at the side-effects of vaccination.

A few of the studies that made the list received online attention for reasons you might not expect - a marriage proposal hidden in the footnotes of one article was quickly spotted and widely shared on social networks, and initial coverage of one exciting paper was later criticised for assigning credit disproportionately to the male author in the study.

Data was collated on the 16th of November 2015, for articles published from November 2014 onwards. Editorial and comment content is excluded. Author and institutional data was collated via a mixture of automatic matching with crossref and the GRID database, and manual curation. Altmetric scores shown were captured at the time of collation, and may have changed slightly since.

Altmetric was founded in 2011 and has made it a mission to track and analyze the online activity around scholarly literature. Altmetric collates what people are saying about research outputs online, and works with some of the biggest publishers, funders and institutions around the world to deliver this data in an accessible and reliable format.

Altmetric is supported by Digital Science – a technology company that combines world-class technology with a resolute focus on scientists and those who support the research process.