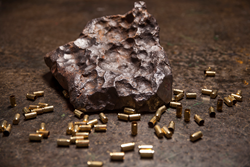 4.5 Billion Year Old Meteorite To Be Transformed Into Firearms

Founded in 2011, Cabot Guns has been producing premiere, state-of-the-art 1911 style pistols constructed to aerospace precision standards. Now the company has commenced work on extra-terrestrial pistols. Building on their success from setting a world record earlier this year for the highest price ever paid for a new pistol, Cabot is now set to shatter records with an offering of a mirror image set of pistols constructed from a 4.5 billion-year-old meteorite.

“We wanted to raise the bar again,” says Cabot founder and President Rob Bianchin, “The pistol set will be a modern work of functional art and the ultimate set of luxury guns.” The out-of-this-world pistol set consists of two precision manufactured guns. The twin right and left handed 1911 style semi-automatic 45’s tentatively to be called The Big Bang Pistol Set. Cabot previously introduced pistol grips constructed from meteorite, but the idea of constructing a complete set of guns from meteor is unprecedented.

Earlier this year, Cabot acquired a 35 kg portion of the prized Gibeon meteor which met the size characteristics for the project from famed meteor hunter and expert Robert Haag. The meteor, dated to an age of 4.5 billion years, was first discovered in the sub-Saharan part of Africa now known as Namibia in 1838. It is believed to have landed on Earth during pre-historic times. Not only is the age and metallurgical composition of the Gibeon meteor fantastical, it is considered the Cadillac of meteors in large part because of the aesthetic Widmanstattten pattern exhibited but the meteorites grain pattern once acid etched. Tiny portions of the valuable Gibeon meteor has been used by jewelers such as Rolex, but the scale and complexity of the pistols is ambitious.

“It’s both romantic and fascinating to imagine that this meteor traveled across the heavens for four billion years before landing on Earth and is now being transformed into Cabot pistols,” states Bianchin.

Cabot will display a sampling of gun components made from meteorite at the SHOT Show in Las Vegas, the industry’s major trade show from Jan 19 to 22, 2016. The Big Bang Pistol Set will make their public debut during the NRA Annual Meeting and Convention in Louisville, KY, in May.

The pistols will likely be sold at auction and without a doubt will be the crown jewel of any museum or private collector interested in either meteors or firearms. Cabot has been offered $250,000 from a collector based on concept alone but estimates on the value have ranged from $500,000 to over $1,000,000.

Prized meteor such as the Gibeon is sought out by collectors and traded by the gram. The scale and use of the material to this extent of making a high precision functional firearm has never been attempted before.

Meteorite is hardly an optimum material for firearms, so numerous technical matters have been overcome to construct the pistols using advanced aerospace techniques to make the pistols fully functional.

To merely cut the meteorite, a three-dimensional laser scan of the meteorite was created to plan the cuts required to make each component of the pistols in a process analogous to cutting a rare diamond. George Dante, a world renowned taxidermist and environmental artist who has been called Michelangelo of Taxidermy by National Geographic has been retained to create a special gun case and display for the pistols. Additional details about the pistols will be revealed by Cabot over coming months.

Cabot pistols have already garnered an elite following of owners who include royalty, prominent foreign heads of state, celebrities, rock stars, and 1911 enthusiasts alike. As a precision shooting instrument, Cabot 1911’s have been employed by Brian “Gunny” Zins to win two consecutive NRA National Pistol Championships and the Cabot NRA National Center Fire Championship in the shooting discipline of Bullseye.

Cabot Guns were first described as the “Rolls Royce of 1911’s,” by S.P. Fjestad, Author and Editor of the Blue Book of Gun Values, the “bible” of gun reference. Fjestad has also taken the position that a set of Cabot mirror image pistols, The Presidentials (2014), were the finest non-engraved pistols ever built in the United States.
The Cabot Guns team takes pride in workmanship and obsessive perfection to the most extreme levels of the American can-do attitude. “We’ve had a meteoric rise to the top of the luxury firearms industry, and it’s only appropriate that we now make pistols made from a meteor,” says Bianchin tongue in cheek.

Photos and additional information on The Big Bang Pistol Set will be posted on Cabot’s Instagram page, @cabotguns.