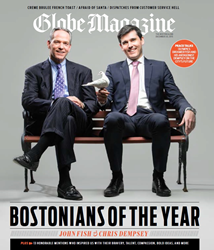 2015 Bostonians of the Year Cover

We're excited to award Bostonians of the Year to Chris Dempsey and John Fish for their roles leading the campaigns for and against Boston’s 2024 bid – this debate forced us to look critically at Boston's future and the type of city we want it to become.

The Boston Globe Magazine has named Chris Dempsey, co-chair of No Boston Olympics, and John Fish, Boston 2024 chairman, as its 2015 Bostonians of the Year. The special annual issue, which features an exclusive joint interview by Globe business columnist Shirley Leung with the two leaders who squared off against each other over Boston’s 2024 Summer Olympic bid, appears this Sunday, December 20, and online at bostonglobe.com/magazine.

In selecting Mr. Dempsey and Mr. Fish, the magazine cited their roles in sparking a debate about Boston’s future – “Whether you were for or against the Olympics, the pair got the whole region talking about what the city’s future should look like and how we should get there.”

The magazine sat down with the pair to get their perspectives on Boston’s attempted Olympic bid, a topic that dominated the headlines for most of this year, and to answer two questions: Was it worth it, and what does it all mean for Boston’s future? The interview was their first face-to-face meeting since July when Boston ended its Olympic bid.

“This year’s distinguished honorees all made an impact locally, nationally, or internationally, making it a very challenging selection process,” said Veronica Chao, editor of the Boston Globe Magazine. “We are excited to award 2015 Bostonians of the Year to Chris Dempsey and John Fish for their roles leading the campaigns for and against Boston’s Olympic 2024 bid – this debate forced Boston to look critically at its future and the type of city Bostonians want it to become.”

In addition, the magazine profiles 13 other notable Bostonians of 2015, which include: Lydia Edwards, legal aid and pro bono attorney, for her relentless contribution to the immigrant worker community fighting for their social rights; Secretary of State John Kerry and U.S. Energy Secretary Ernest Moniz, for their statesmanship negotiating the nuclear agreement with Iran; Bill Richard, whose son Martin Richard was killed in the Marathon Bombings, for his humanity and grace during the Tsarnaev bombing trial; and nine other remarkable citizens from the Hub.

This is the 12th year that the Boston Globe Magazine has selected influential and inspiring Bostonians of the Year. Previous honorees include the 25,000 employees of Market Basket, three civilian heroes from the Boston Marathon bombings, both Elizabeth Warren and Scott Brown (who would later battle one another in a U.S. Senate race), former Red Sox General Manager Theo Epstein, and U.S. Attorney Carmen Ortiz.

Bostonians of the Year are selected by the editors of the Boston Globe Magazine.