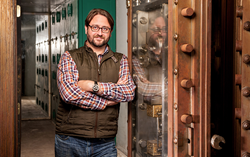 Linode, a leading provider of cloud hosting services, has purchased a 15,000-square-foot building in Old City Philadelphia as its newest corporate office. Situated at the corner of 3rd and Arch streets, the site is central to Philadelphia's emerging hub of technology, dubbed by a 2014 city resolution as N3RD (pronounced “nerd”) Street.

“Our team is elated to be joining this community of innovative, talented, visionary nerds,” Aker said. “This is exactly the kind of neighborhood a company like Linode is going to thrive in, and I think our Linodians are going to contribute tremendously to the culture on N3RD Street, which is already occupied by other great tech organizations like Devnuts, Seer Interactive, Indy Hall and WebLinc.”

While Philadelphia’s tech community already has several established shared workspaces and collaborative relationships, Aker believes Linode will bring even more intellectual capital to the tech-centric corridor. He is confident the new location will allow his staff to enjoy a hub of industry-specific innovation they haven’t been able to access in Linode’s other offices in Galloway Township and King’s Hall of Haddonfield, New Jersey.

“True innovation occurs when visionary people come together in an environment that stimulates their minds and fosters their creativity,” Aker said. “The moment I saw this building and visited the N3RD Street community, I knew Linode’s future was right here.”

The neoclassical building, adjacent to the Betsy Ross House, was constructed in 1902 as the Union National Bank. Since then, the building housed the Corn Exchange National Bank & Trust Co. from 1907 to 1970, but is perhaps most famously known as the 2004 setting for MTV’s The Real World: Philadelphia. The building's combination of classical beauty, historic relevance and ideal location in Philadelphia captured Linode CEO Christopher S. Aker’s interest about a year and a half ago.

“We are thrilled to welcome Linode to Old City,” said Mayor Michael A. Nutter. “Linode is the latest in a long line of technology companies that have established a presence in Philadelphia in order to access our incredible talent pool and be part of our vibrant, dynamic and growing tech community. We wish them the best of success for their continued growth in Philadelphia.”

Resident tech companies are happy to see Linode move into the neighborhood.

“Seer is thrilled to see yet another great company come into the city and join us on the N3RD Street corridor,” said Seer Interactive founder Wil Reynolds, an Old City tech firm specializing in SEO. “There's momentum right now in this part of town and throughout the entire city. We're excited to see the expansion continue! Looking at the size of their space, Linode is taking a huge bite and setting up long term roots.”

Mike Maher, co-founder and CEO of Benjamin’s Desk, as well as Houwzer, a disruptive Philadelphia real-estate brokerage startup, also spread the welcome mat. “This is an extraordinary win for Old City, the Philadelphia tech scene, and the region,” Maher said. “Linode's move to Philly is a strong signal of the talent pool hitting critical mass here.” Maher mentioned that Linode’s arrival in Old City further demonstrates the regional networks being built between South Jersey and Philadelphia. “I applaud Linode's leadership for making this move and doing it in a big way with the purchase of the Corn Exchange National Bank building, a landmark site for a new era of landmark opportunities.”

The three-story neoclassical building was placed on Philadelphia’s Register of Historic Places on January 6, 1977. Since the taping of MTV’s The Real World: Philadelphia finished in August of 2004, the building briefly served as an art gallery and in recent years was available for rent as an event venue.

Aker is planning to convert the building to an office space that will accommodate 85 existing employees as well as leave room for approximately 75 new hires. He also expects the renovations to take about a year and plans to begin accepting RFPs immediately from area architectural firms experienced in leading adaptive reuse projects.

About Linode
Linode (linode.com | @linode) is a leading cloud hosting provider founded in 2003. The company provides hosting infrastructure to over 400,000 customers worldwide from eight datacenters throughout North America, Europe and Asia.

Subscribers can create a server in under a minute for as little as $10/month and create a scalable environment to meet ever-changing demand – paying only for what they use, without long-term commitments.

About Mike Maher
Co-founder and CEO of Houwzer, a real-estate startup disrupting Philadelphia’s residential sales market, Maher and his team are expanding Houwzer to the South Jersey market in first quarter 2016 and will be setting up shop at Haddonfield’s King's Hall, a co-working space, also shared by Linode. Maher also co-founded and chairs Benjamin's Desk, a growing co-working space in Philadelphia with spaces in Rittenhouse Square, Washington Square, and Pennovation.

About Wil Reynolds
In 2002, Wil Reynolds founded Seer Interactive, a digital marketing firm specializing in SEO, SEM and Analytics. With offices in Philadelphia and San Diego, Reynolds leads his team of passionate, data-driven marketers committed to connecting communities around a common purpose and through innovative solutions.

The expansive lobby area of Linode's newly purchased property served as part of the setting for MTV's The Real World: Philadelphia TV series in 2004.Linode, MTV, The Real World,