Sim Shalom online synagogue congregant, Robert Hadley, celebrated his first Rosh Hashanah and Chanukah as a Jew by Choice. Raised as a Southern Baptist in a county with only two Jews and no synagogues made this an unlikely journey for the spirited electrician . 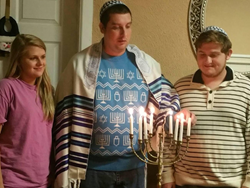 Jew by Choice, Robert lighting the menorah with his two children

On December sixth, the journey of Robert Hadley's conversion to Judaism took on profound significance as he recited the Hebrew blessing and lit his first menorah candle wearing a yarmulke and a tallit which draped over his Seth Rogen look alike Chanukah sweater. Hadley, a Sim Shalom online synagogue congregant, converted to Jewish Universalism and has enjoyed other Jewish Holidays of Rosh Hashanah and Passover as a Jew by Choice.

According to Hadley, "Choosing to convert to Judaism was a process that began after the birth of his two children which elicited a deeper meaning of life and faith." His compelling quest for spirituality and religion led him to study the heritage of his father - a non practicing Jew. Hadley's mother is a Southern Baptist. They occasionally attended one of the local churches nearby.

After a series of readings about Judaism the student identified with the pluralistic nature of Judaism. With no temples nearby Hadley searched the Internet for answers and through chance found a community in Sim Shalom the online Synagogue. Working with Sim Shalom' s founder Rabbi Steven Blane, the conversion included: An Introduction to Torah and God through Jewish Traditions and Symbols, Lifecycle Events, Shabbat, and Festivals and High Holidays. Students are also required to attend services with different denominational congregations. To fulfill the requirement Hadley traveled 180 miles to the nearest service led by a welcoming Chabad. He now attends the accessible Sim Shalom participatory online services.

Embracing his new found Jewish faith, Hadley celebrated the Festival of Lights with his family in December. His family has been supported of his decision, yet have not chosen the same path. Hadley hopes they too will find a home of their choosing. Playing dreidel with chocolate gelt money was met with questions by the now grown teenagers as to why the game could not be played with real money. Following in the tradition of Tikkun Olam the Jewish concept of repairing the world with acts of kindness, Hadley's solution was only fitting, each was given the sweet chocolate gelt and the value of the money was donated in their honor to a local non denominational charity.

About Sim Shalom and JSLI
Sim Shalom is an interactive online Jewish Universalist synagogue which is liberal in thought and traditional in liturgy. Created in 2009 by Rabbi Steven Blane on Manhattan's Upper West Side, Sim Shalom offers a means of connecting the unconnected. Rabbi Blane leads accessible and short Kabbalat Shabbat services every Friday night using a virtual interface and additionally Sim Shalom provides online education programs, Jazz concerts, conversion and life-cycle ceremonies along with weeknight services at 7:00PM EST led by Rabbis and students of this online community.

Rabbi Blane is also the founder and director of the Jewish Spiritual Leader's Institute, (JSLI), the online professional rabbinical program.

Sim Shalom, a non profit 501 © (3) tax-exempt organization, nurtures a Jewish connection through its mission of innovative services, creative education and dynamic outreach to the global community. For more information visit http://www.simshalom.com or call 201-338-0165.