The International Driver Excellence Award is CVSA's recognition of the exceptional careers of professional commercial motor vehicle drivers and their commitment to public safety. 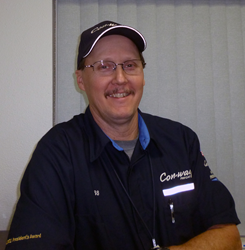 Just seeing my coworkers on stage, hoisting up their trophies, gives me a sense of pride and accomplishment knowing I had a small part in making it happen.

The Commercial Vehicle Safety Alliance (CVSA) is proud to announce the winner of its first annual International Driver Excellence Award (IDEA), Ross Reynolds of Con-way Freight who has driven more than 2 million miles over nearly 40 years without an accident.

Launched in 2015, this annual award recognizes individuals who go above and beyond the performance of their duties as a commercial vehicle driver, distinguishing themselves conspicuously and beyond the normal call of duty through the achievement of safe operation and compliance carried out with evident distinction for an extended period of time.

Ross Reynolds has been driving trucks since 1978, and has spent the last 29 years working at Con-way Freight. Over that time, he has received numerous awards and accolades, including a 25-year special recognition award for safe driving and working, as well as a number of Con-way Freight leadership awards. Outside of Con-way, he was a finalist for the American Trucking Associations’ (ATA) America’s Road Team three years in a row. Reynolds, based at Con-way Freight’s Tucson, Arizona, service center, also placed in the top four of every Arizona State Truck Driving Championship (ATDC) from 2001 to 2010. In 2014, he went on to design the ATDC obstacle course, including four new obstacles.

However, if you were to ask him what has been the most rewarding part of his job, you’d receive a different answer. For Reynolds, who also serves as Con-way Freight’s senior driver trainer in Tucson, nothing has been more fulfilling than teaching the drivers of tomorrow. “I really enjoy teaching and coaching other drivers,” said Reynolds. “Seeing ‘the lights come on’ when they finally understand a topic or are able to negotiate an obstacle for the TDC, like parallel parking, for the first time is very rewarding.’’

Reynolds conducts Con-way’s monthly service center safety training and developed a new program to educate drivers on the Smith System techniques of awareness, defensive driving and collision avoidance. He trains and mentors others in advanced safe-driving practices and is the service center’s Drive Cam coach. In fact, many of Reynolds’ fellow drivers affectionately refer to him as “coach.”

Reynolds was nominated by Bill Rzepecki, service center manager for Con-way Freight in Tucson. In submitting the nomination, Rzepecki said of Reynolds, “His commitment to the industry and professional excellence makes Ross Reynolds an ideal and worthy candidate for IDEA. He is a superb role model for current and future professional drivers, and deserves to be recognized for his efforts and contributions to our industry.”

Reynolds also leads Con-way Freight’s local Voices and Values team which encompasses the community giving team and works with other employees to help plan and organize fundraising drives and other events supporting local charities and social service organizations, such as food, clothing and holiday toy drives.

“We, at CVSA, cannot be more proud to announce Ross Reynolds as the winner of the first annual International Driver Excellence Award,” said CVSA Executive Director Stephen A. Keppler. “He embodies everything we hoped for and more in an exceptional driver and a man of character. We are so impressed by his unwavering, long-term commitment to public safety and his dedication to educating and guiding the drivers of tomorrow.”

Throughout Reynolds’ career, he has driven bobtails, pups, doubles, vans, sleepers, tankers and flat beds. Reynolds has been married for 30 years and, together, he and his wife, Cathy, sing southern gospel music and have two recorded CDs. He plays guitar and harmonica and composes the words and music to many of their songs. Reynolds volunteers with small churches by remodeling and updating their sound systems, and he and his wife helped start a church 17 years ago, where he has been a worship/music director for 12 years.

Ross Reynolds will be presented with his award on Sept. 14, 2015, at the CVSA Annual Conference and Exhibition in Boise, Idaho.

CVSA established the International Driver Excellence Award to recognize and officially acknowledge the exceptional careers of professional commercial motor vehicle drivers and their commitment to public safety. As an organization dedicated to advancing safety and efficiency of the transportation industry, HELP Inc. joined with CVSA to sponsor the Alliance’s first International Driver Excellence Award.

To learn more about the award program, visit http://www.cvsa.org/programs/driver_excellence_award. The 2016 IDEA nomination form will be posted in early 2016.