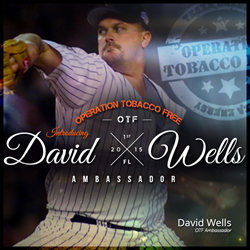 I am committed to being part of the movement to get tobacco out of youth sports.–Operation Tobacco Free Ambassador, David Wells

TeaZa® Energy, LLC announces today the ambassadorship of former Major League Baseball (MLB) pitcher, David Wells, for their prosocial initiative, Operation Tobacco Free (OTF). Wells is the first member of OTF’s own “Hall of Fame” which will feature other prominent figures and community leaders. Wells played in the major leagues for 20 years with several teams including the Toronto Blue Jays and is best known for pitching the 15th perfect game in baseball history when playing for the New York Yankees. By lending his name and support to the campaign, Wells hopes to spread the message to kids in youth sports that it’s not hip to dip.

OTF is a prosocial initiative launched earlier this month that serves to discourage tobacco use and inspire healthy lifestyles through education, community outreach and support of youth sports and health programs.

“I am committed to being part of the movement to get tobacco out of youth sports,” Wells said.

But these efforts have not focused on smokeless tobacco use, which has remained steady among youth and adult populations.

Tobacco in any form is harmful, including cigarettes, cigars, spit tobacco and any other product containing nicotine. All tobacco products, including smokeless tobacco, contain nicotine which is highly addictive. Chew contains at least 28 chemicals known to cause cancer and up to twice the amount of nicotine as a cigarette. Smokeless tobacco use can cause oral lesions, oral cancer, esophageal cancer, pancreatic cancer, heart disease, gum disease and death.⁵

“A lot of kids don’t even realize that dipping is highly addictive and causes major health problems. As a coach, I’m hoping I can influence kids to refuse to use tobacco in the first place,” said Wells who now serves as head coach of his alma mater’s baseball team at Point Loma High School in San Diego, California.

Being a veteran of the major leagues, Wells understands how deeply ingrained smokeless tobacco use is in baseball culture.

Some research indicates as many as 50% of high school athletes use smokeless tobacco on the baseball field at the JV and varsity level.⁶

But baseball is starting to do an about-face on tobacco use.

The 2014 parotid cancer related death of MLB Hall of Famer and smokeless tobacco user Tony Gwynn, inspired conversations about change in tobacco use in baseball.

In April, San Francisco made history by becoming the first city to take tobacco out of baseball by signing into law an ordinance to prohibit the use of all tobacco products at all baseball venues and athletic fields within the city and county of San Francisco, including by fans and players. As of September, Boston and Los Angeles have also enacted similar laws.⁸

Wells became interested in supporting OTF through his friendship with Brent Agin, MD, Founder and CEO of TeaZa® Energy and Operation Tobacco Free. Dr. Agin’s inspiration to support the anti-tobacco movement grew from consumer response to his innovative TeaZa® Energy pouches. The herb and vitamin mini-tea bags weren’t intended to be an alternative to tobacco, but many customers say TeaZa® has helped them supplement or stop their tobacco habit.

“As a baseball player, chewing tobacco is all around and tempting throughout the season. TeaZa not only is safe but beneficial in helping me and other users to keep pushing themselves while keeping their focus,” said Bryce Bullock, a customer survey respondent who plays youth sports.

“TeaZa is a great product. I use it every day,” Wells said.

OTF’s sponsorship of youth athletic and health programs will build on the momentum toward ending smokeless tobacco use in the US. OTF will sponsor the team Wells coaches next season. OTF sponsorships provide a financial donation for equipment and supplies while giving kids on the team the opportunity to take the pledge to refuse to use tobacco.

To apply for a sponsorship, take the pledge and learn more about OTF visit TeaZaEnergy.OperationTobaccoFree.com.

About Operation Tobacco Free
Operation Tobacco Free (OTF) is a prosocial initiative sponsored by TeaZa® Energy that serves to discourage tobacco use and inspire healthy lifestyles through education, community outreach and support of youth sports and health programs. For more information visit: TeaZaEnergy.com/OperationTobaccoFree.

OTF- The Tobacco About Face