FIELD STATION: DINOSAURS Announces 2015 To Be Their Final Season in Secaucus - Visit the Dinosaurs Beginning May 23 Before the Migration Begins

Field Station: Dinosaurs (http://www.fieldstationdinosaurs.com) has announced that their 2015 season, which begins May 23, will be the last at their current Secaucus location. The park has been a huge hit with the hundreds of thousands of people who have visited since it opened in 2012 and Field Station: Dinosaurs will be moving to a new location after this season. 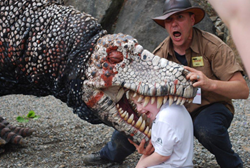 Walk among the dinosaurs and engage with Guy Gsell and Prince, a baby T-Rex, at Field Stations: Dinosaurs for their final season in Secaucus, New Jersey

Field Station: Dinosaurs has announced that their 2015 season, which begins May 23, will be the last at their current Secaucus location.

As part of the original deal with Hudson County, which controls the site at Laurel Hill Park, the County is exercising their right to repurpose the land for a new high school. As a result, Field Station: Dinosaurs will be moving to a new location after this season and those details will be announced at a later date. The park has been a huge hit with the hundreds of thousands of people who have visited since it opened in 2012. It has also been a boon to the local economy, having provided a significant number of jobs to area residents.

Just nine minutes from New York City and 90 million years in the making, Field Station: Dinosaurs is an adventure for the whole family and is set to open it's gigantic farewell season on Saturday, May 23rd and running into early September. It’s the perfect time of year to visit, explore, learn and enjoy before the dinosaurs have to begin their big migration in the fall.

“Field Station: Dinosaurs continues to celebrate everything that is fun, mysterious and thrilling about dinosaurs, and we look forward to a great 2015 season ” continued Gsell. “We educate in a way that is engaging and exciting for our visitors, providing unique “dino-encounters” that they’ll never forget, and this year will be no exception.”

This is the summer to visit and re-visit these life-size, ultra-realistic animatronic dinosaurs that respond to your presence with their movements and sound. See what it’s like to walk among Tyrannosaurus rex, Triceratops, Velociraptor and even the massive, 90-foot long Argentinosaurus. Discover the sciences of paleontology and geology through fun games, exciting activities, special events and engaging films that educate us about dinosaurs and their impact on our world today.

Field Station: Dinosaurs is located at 1 Dinosaur Way (off Exit 15X of the New Jersey Turnpike) at Laurel Hill Park at Secaucus, NJ. Admission to the park starts at $15.00 (when purchased prior to July 4) and tickets are available online at http://www.Field StationDinosaurs.com through June 28 on Saturdays, Sundays and Memorial Day and from June 30 through September 6 from Tuesdays through Sundays and Labor Day. Season passes and add-ons for access to all of the park’s programming and activities are also available.

Nestled at the base of a 150 million year old rock formation, the Field Station is an oasis of natural wonder with over thirty life-sized, realistic dinosaurs come to life thanks to the brilliant engineering of the world's leading roboticists and the imagination of our artists.

Scientists from the New Jersey State Museum have worked to ensure that the exhibition encompasses the latest theories and discoveries in the fields of paleontology, geology, and environmental studies but at the center of it all is the fun, the joy and the wonder of dinosaurs. For more information on the adventure, tickets, special passes and offers visit our web site at http://www.fieldstationdinosaurs.com