100% of the proceeds from “Kittenish,” NY Times bestselling author Gwen Cooper’s new book, will be donated to Humane Society International to fund ongoing relief efforts in Nepal. The 200-page, crowd-sourced book (http://www.hihomer.com) showcases hundreds of photos of cats taken by the cats themselves, submitted by cat owners from several dozen countries and every continent on the globe except Antarctica. 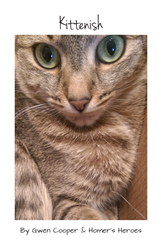 “Kittenish’ also showcases the dedicated work of smaller, local rescues,” says Cooper, noting that most of the photos in “Kittenish” are of rescue cats.

New York Times bestselling author Gwen Cooper today released “Kittenish,” a crowd-sourced collection of cat selfies sending up Kim Kardashian’s bestselling “Selfish.” The 200-page book showcases hundreds of photos of cats taken by the cats themselves, submitted by cat owners from several dozen countries and every continent on the globe except Antarctica. Like “Selfish,” “Kittenish” even contains an interior black-page section where the “sexy selfies” are featured.

“Kittenish” retails in ebook format for a minimum suggested price of $3.99, and as a print-on-demand physical book for $23.99. Both versions are available for purchase on Cooper’s website http://www.hihomer.com.

Cooper will donate 100% of the proceeds from “Kittenish” to Human Society International to support their ongoing animal-rescue efforts in Nepal. “’Kittenish’ also showcases the dedicated work of smaller, local rescues,” says Cooper, noting that most of the photos in “Kittenish” are of rescue cats. “There are cats in this book who were rescued by groups like Tenth Life in St. Louis, Austin Pets Alive! in Texas, and even FOD’s Cathouse in Norway.”

Cooper first put out the call for cat selfies on May 15 to “Homer’s Heroes,” the community of animal rescuers and enthusiasts that has grown up around Homer the Blind Wonder Cat, subject of Cooper’s bestselling 2009 memoir “Homer’s Odyssey: A Fearless Feline Tale.” Within five days readers had submitted over 8,000 photos to Cooper, who reaches 10 million unique visitors each week through Homer’s social media presence. From this, Cooper culled some 400 pictures for “Kittenish.”

Cooper observes that many of the animals displaced and/or injured by the April 25th quake in Nepal are working animals who contributed to the livelihoods of people who already found it difficult to earn a subsistence living. And, of course, many are beloved companion animals whose owners refused to evacuate dangerous areas—at peril to their own lives—because they didn’t want to abandon their animal friends.

“When you help animals, you help people, too,” notes Cooper. “It’s as simple as that.”

In the past, Cooper has raised tens of thousands of dollars to support animal-rescue efforts in response to crises around the world, including the Egyptian revolution, the Japanese tsunami, and natural disasters here in the US. Her May 2015 fundraiser for Animal Nepal raised over $13,000 in individual donations in just 24 hours. This is the first time Cooper is publishing a book for fundraising purposes, and she’s hoping “Kittenish” will click with her audience.

“Cats are arguably the only ones having as a big a pop-cultural moment as the Kardashians, so the comparison seemed apt,” says Cooper.

“I’m occasionally asked why my readers should bother supporting animal-rescue efforts in countries other than their own,” Cooper adds. “My answer is that animals aren’t citizens of countries. They’re citizens of our hearts, and our hearts have no borders.”

To obtain a press copy of “Kittenish” or interior/cover images, or to schedule an interview with Ms. Cooper, please contact Lisa Klein at lisakleinpr(at)gmail(dot)com.

About Gwen Cooper
Gwen Cooper is the New York Times bestselling author of the memoir “Homer's Odyssey: A Fearless Feline Tale, or How I Learned About Love and Life with a Blind Wonder Cat” and the novels “Love Saves the Day” and “Diary of a South Beach Party Girl.” Her work has been published in more than two dozen languages and countries around the world. She is a frequent speaker at shelter fundraisers and donates 10% of her royalties from “Homer's Odyssey” to organizations that serve abused, abandoned, and disabled animals. Gwen lives in Jersey City with her husband, Laurence. She also lives with her two perfect cats—Tripod Clayton and his litter-mate, Fanny—who aren't impressed with any of it.