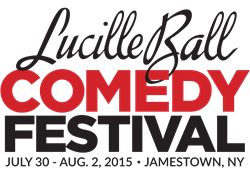 “The Festival offers something for everyone with contemporary comedy, five comedy showcases, two shows with Jerry Seinfeld, family comedy showcases and more," said Malachi Livermore of the National Comedy Center.

“The schedule offers something for everyone with contemporary comedy such as Nick Offerman, five comedy showcases, and two sold-out shows with Jerry Seinfeld; family comedy with the Story Pirates and Lucy and Ethel’s Dinner Show; or even opportunities to emerge as a new comedian with classes in comedy and the COZI TV Comedy Search,” said Malachi Livermore, programming and venue manager for the National Comedy Center.

Nick Offerman will be performing his show for mature audiences during the festival on July 31st (Reg Lenna Center for the Arts). Offerman is an actor, writer, humorist and woodworker, best known for the role of Ron Swanson on NBC’s hit comedy series “Parks & Recreation.” For his work on the show, Offerman won a Television Critics Association Award for Achievement in Comedy in 2011, having earned his first nomination in 2010. He also received two Critics’ Choice Television Award nominations for Best Supporting Actor in a Comedy Series. In 2013, Offerman released his New York Times Bestselling book, Paddle Your Own Canoe: One Man’s Fundamentals for Delicious Living. His second book is due out this year.

Melissa Rivers and Kelly Carlin, daughters of Joan Rivers and George Carlin respectively, will take part in a very special Comedy Roundtable that can only be seen at the Lucille Ball Comedy Festival on July 31st. The discussion will feature an in-depth look at the careers of comedic greats, as well as the impact of their contributions to modern culture.

On Saturday August 1st, Kelly Carlin will be bringing her renowned one-woman show, Carlin Home Companion: Growing Up With George, to Jamestown. A Carlin Home Companion is a funny, touching, intimate look inside the life of one of the most brilliant comedy minds the world has ever known from the unique perspective of a young woman trying to find her own voice.

The opening night of the festival, July 30th, will see the return of the popular Stand-Up Showcase. Comedians Beth Stelling, Pete Lee, and Pat McGann will perform during this show. Past festivals have featured then-rising comedians such as Ellen DeGeneres, Ray Romano, and Lewis Black, and this showcase aims to catch comics on a similar rise to the top. In keeping with the Center’s mission-based emphasis on the healing power of comedy, this show is free to attend for all U.S. military past and present.

The critically-acclaimed Story Pirates will perform in Jamestown on August 1st. The kids-comedy troupe, lauded by comedian Jon Stewart, have been seen on CNN’s Larry King, NBC’s Today, and live on stage with Conan O’Brien. This non-profit creative writing organization made up of professional actors and comedians performs a show based on stories written by children. Kids can submit stories online at http://www.lucycomedyfest.com for a chance to have their story performed. This show is free to attend thanks to sponsors of the Lucille Ball Comedy Festival, and is great for ages 4-12.

Three nights of Comedy Late Night will take place in the Tropicana Room above the Lucille Ball Desi Arnaz Museum from July 30 - August 1. Comedians from NYC to Los Angeles will perform in a re-creation of Ricky Ricardo’s Manhattan nightclub in this showcase that features new and blue material. Past performers include Joe Machi, Harrison Greenbaum, Keith Alberstadt, Jackie Kashian, Myq Kaplan, Mike Brody, Pete Lee, Mike Cody, and Tony Deyo. The comedy album “Live From Jamestown: Late Night @ Lucy Comedy Fest” was previously recorded during this show in prior years, and can be purchased online at http://www.shop.lucy-desi.com and anywhere comedy content is sold.

The Lucille Ball Comedy Festival is excited to partner with NBC’s COZI TV this summer for the COZI TV Comedy Search. This unique contest offers undiscovered talent the opportunity to take their best shot at being crowned America’s newest comic champ. The Grand Prize winner receives a $2,500 cash prize, the chance to appear on COZI TV and an all-expenses paid trip to Jamestown to perform at this year’s festival. The online contest will include multiple phases of competition including viewer voting and a celebrity judge panel that includes comedians Tom Cotter, Kerri Louise, Chuck Nice and Jon Rineman. Participants are encouraged to submit audition videos to the contest’s web page on cozitv.com.

"Ball wanted people to celebrate all comedy in honoring her legacy,” said Journey Gunderson, executive director for the National Comedy Center. “This festival and the National Comedy Center do just that. From retrospectives on George Carlin and Joan Rivers to live performances by today's rising voices and established stars, Jamestown celebrates the craft and its contributors."

About the National Comedy Center
The National Comedy Center, a 501(c)(3) non-profit, is a developing national attraction based on the celebration of comedy: the craft and its contributors, and embodies Lucille Ball’s vision for her hometown of Jamestown, New York. The visitor experience is being designed by world-renown creative firms: Jack Rouse Associates, and interactive specialist Local Projects, which just completed work on the 9/11 Memorial Museum. Project feasibility and economic forecasting has been provided by AECOM.

In December, the National Comedy Center (NCC) project in Jamestown, NY was awarded $1.5 million by New York State Empire State Development and Governor Andrew Cuomo. The $1.5 million in state funds will help complete the NCC’s vision for the first national attraction complex dedicated to the art of comedy in the United States.

Lucille Ball’s hometown of Jamestown, NY honors the legacy of “The First Couple of Comedy” with the Lucille Ball Desi Arnaz Museum. The museum attraction is open seven days a week, and features replica sets, Lucille Ball’s Emmy awards, props, costumes, and rare memorabilia from I Love Lucy. Tripling in size in 2006, the mission of the museum and center for comedy is to preserve the legacy of Lucille Ball and Desi Arnaz and enrich the world through the healing powers of love and laughter through its commitment to the development of the comedic arts. For additional information on the Lucy Desi Museum & Center for Comedy, as well as its online gift shop, visit http://www.lucy-desi.com.