The IWEC international honor caps a banner year for Nation Waste, Inc., and Rios, as she was featured on CNBC Blue Collar Millionaires and was named Minority Small Business of the Year at the State of Texas Governor’s Small Business Awards 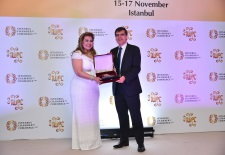 In Istanbul, I had the honor to celebrate amazing women entrepreneurs, spanning the globe from Georgia to Sweden, from India to Cape Town, and from Peru to Pakistan.

Maria Rios, President and CEO of Nation Waste, Inc., is one of two United States 2015 honorees as presented by the International Women’s Entrepreneurial Challenge (IWEC).

The International Women’s Entrepreneurial Challenge (IWEC) hosted its ninth annual Conference in Istanbul, Turkey, in collaboration with the Istanbul Chamber of Commerce. The theme of this year’s conference was “Connecting Women Businesses Globally: Driving Growth Through Women’s Economic Participation”, a topic underscored by the participation of delegations of women entrepreneurs from Pakistan and Afghanistan, through a strategic alliance between the Pakistan Afghanistan Joint Chamber of Commerce and Industry, in collaboration with the U.S. Department of Commerce and IWEC.

This year, the 27 women entrepreneurs that were honored with the Award came from the United Kingdom, Peru, Spain, Serbia, South Africa, Turkey, Australia and India, with first time awardees from Georgia and Pakistan. Two outstanding awardees represented the United States: Houston-based Maria Rios, President and CEO of Nation Waste Inc. (NWI); and Michele Ruiz, President and CEO of Ruiz Strategies, out of Los Angeles.

Maria Rios’ company is the first Hispanic woman-owned waste removal company in the United States and one of Houston’s largest minority-owned companies. Fortune named Rios as one its 2013 Most Powerful Women Entrepreneurs in the U.S. This year Rios was featured on CNBC’s Blue Collar Millionaires, a docu-series profiling big personalities who have gained wealth “by getting their hands dirty…and rolling up their sleeves…with a can-do mindset.” CNBC marketed the Rios episode as “The $30M empire built on trash.” Rios was honored this September at the State of Texas Governor’s Small Business Awards as Minority Small Business of the Year.

In 2014 Goldman Sachs honored her as one of its 100 Most Intriguing Entrepreneurs. "We are thrilled that the International Women's Entrepreneurial Challenge has selected 10,000 Small Businesses alumna, Maria Rios, as one of two honorees from the United States,” said Dina Powell, Managing Director of Goldman Sachs. “Since graduating from the program, Maria has hired 20 new employees and increased revenues 99%. Maria represents the very spirit of the program and we wish her continued success."

Upon receiving the IWEC Award, Rios stated: “What could be more outstanding than talking shop and the universal language of business at the 2015 IWEC Annual Conference and Award Ceremony? What an unforgettable and moving experience! In Istanbul, I had the honor to celebrate amazing women entrepreneurs, spanning the globe from Georgia to Sweden, from India to Cape Town, and from Peru to Pakistan. The immutable mission of IWEC triumphed, and I have 26 new friends of a lifetime. What we all have now, as well, is a global mentality and a tenacious will to revolutionize our respective industries.”

To put the impact of IWEC’s constituency into perspective, since the inception of the IWEC Awards, the combined annual revenue of IWEC awardees has grown to $25 billion, with over 125,000 employees worldwide.