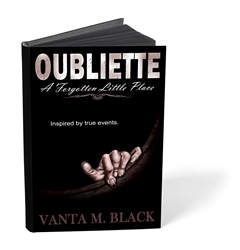 They emptied out the oubliette at Leap Castle in Ireland in the 1920s and discovered remains from over 150 people. That single bite of knowledge consumed me when I...

Inspired by the oubliette inside Leap Castle, the famed most haunted castle in Ireland, and driven by historically accurate events, Oubliette—A Forgotten Little Place (Oubliette) by Vanta M. Black, is now available.

Black explains, “They emptied out the oubliette at Leap Castle in Ireland in the 1920s and discovered remains from over 150 people. That single bite of knowledge consumed me when I first heard it! I pondered the horrific circumstances that led to each soul’s fall into that pit. Who were they? What thoughts consumed them while freedom taunted from above? Did they deserve to be there, or did the elemental creature rumored to haunt Leap Castle manipulate their fate?”

Black sets her horror-thriller at a castle in the Loire Valley of France, and pulls from several poignant historical time periods. The French Revolution, the Reformation, the Black Death, the era of the Roman Empire, the time of the Pagans, the period surrounding the height of the Knights Templar, plus a modern storyline about two sisters hired to renovate the château, comprise the epic adventure.

Personal experiences with entities known as “shadow people” also motivated Black to pen the book. “These specters—I don’t know how else to explain them—tormented me at night. I assumed they were just bad dreams. Then someone else witnessed one hover above me as I slept. I don’t know what it was, but I speculated about the mysterious encounters while writing Oubliette.”

“Oubliette is a cleverly told tale and trek through history where the past and present collide. If you come out the other end of this book with all of your fingernails intact, you are a better woman than I.”
—Lisa Goich, Author, 14 Days: A Mother, A Daughter, A Two-Week Goodbye

“Oubliette is a mosaic of interwoven tales that are unexpected, fresh, and deliciously twisted. There are plenty of thrills and chills to be found here.”
—John Stuart Wildman, Director, The Ladies of the House

The book’s official release party happens at an exclusive location in Los Angeles on November 20th. For pictures and updates, follow #Oubliette and #FallIn on social media.

Oubliette—A Forgotten Little Place is available from Amazon, Barnes & Noble, and other retailers in digital and paperback versions. Hardcover, the audio book, and an autographed limited edition gift basket-combo, are coming soon. More information can be found on VantaMBlack.com.