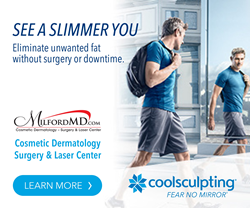 You can now freeze fat away in half the time at MilfordMD Cosmetic Dermatology Surgery & Laser Center! Sit back and relax as we eliminate your double chin, bra bulges, muffin top and thunder thighs!

All indications are that CoolSculpting is hot. Recent RealSelf ratings give CoolSculpting an 83% ‘worth it’ rating, which is a strong showing for a fairly new technology. Patients want results without the downtime, and CoolSculpting offers just that.

Fat-Freezing, which is what today’s popular technology CoolSculpting does to reduce fat areas around the body, is the most popular among body sculpting options, according to a new survey of dermatologic surgeons. The survey results just released make perfect sense to cosmetic surgeon Dr. Richard Buckley, medical director of MilfordMD Cosmetic Dermatology Surgery & Laser Center. Dr. Buckley recently added two CoolSculpting machines to his Milford, Penn., practice because of high patient demand for a non-invasive body sculpting option to liposuction.

“All indications are that CoolSculpting is hot. Recent RealSelf ratings give CoolSculpting an 83 percent ‘worth it’ rating, which is a strong showing for a fairly new technology,” Dr. Buckley says. “Patients want results without the downtime, and CoolSculpting offers just that.” Billed the world's #1 non-invasive fat-reduction procedure, by parent company Zeltiq, CoolSculpting allows physicians, including Dr. Buckley, to contour body areas by freezing unwanted fat without any surgery involved. Doctors need not make incisions to gain access to the fat.

In fact, “fat-freezing” made up 100,000 of the reported 230,000 body sculpting procedures that members of the American Society for Dermatologic Surgery (ASDS) reported doing in the new 2015 survey results. The next most popular body sculpting option, according to the ASDS survey, is radiofrequency at 66,000, followed by tumescent liposuction and laser lipolysis.

As the CoolSculpting story goes, Harvard University scientists noticed years ago that some children who ate popsicles got dimples in their cheeks. These researchers and physicians soon realized that the popsicles were freezing and eliminating small pockets of fat cells. They created and trademarked Cryolipolysis, which is focused on eliminating areas of fat cells by freezing them. The treated fat cells crystalized and died and the body responded by naturally eliminating the dead cells.

While CoolSculpting is all the rage, it is limited in how much fat the device can remove in one session, Dr. Buckley says. CoolSculpting is not to be a weight loss treatment. It’s ideal for smaller areas of fat removal, around the chin, belly, love handles and thighs.

“We can achieve more dramatic body sculpting results with laser liposculpture,” Dr. Buckley says. “The tradeoff is there is some minimal recovery involved versus none with CoolSculpting.” Patients can lose as much as one gallon of fat with each liposculpture session. Laser liposculpture options include the Cynosure SmartLipo Triplex and Sciton’s ProLipo. Dr. Buckley says laser liposculpture is a minimally invasive procedure, during which he uses local tumescent anesthesia to gently insert small cannulas under the skin to permanently suction out pockets of unwanted fat.

“Liposculpture is among the most popular procedures at our practice because we can use it to address many areas of concern, including the face, chin, neck, breasts, chest, arms, back, abdomen, love handles, hips, buttocks, thighs, knees, calves, and ankles” he says. “We can even uncover muscle tone—those six-pack abs that people want to show off on the beach.”

The good news for patients who want to rid their bodies of unwanted fat pockets is that there now are great and safe noninvasive and minimally-invasive options, according to Dr. Buckley.