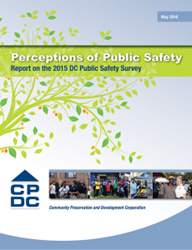 The survey was commissioned to create a baseline level of perceptions of public safety among city residents and to promote more collaboration with local police.

The findings from this survey offer an opportunity for residents and police to see where the problems are and work together toward solutions that can result in better and improved communications and levels of trust.

District of Columbia residents who live in Ward 8 feel the least safe of any in the city, are more likely to have observed or experienced a violent crime, and are least likely to trust police than others who live here.

Those are key findings from a new survey on public safety released today by the Community Preservation and Development Corporation (CPDC), a leading affordable housing not-for-profit with more than 2,700 units and 5,000 residents in Washington, DC; the Council for Court Excellence and the Local Initiatives Support Corporation.

The survey, conducted online and via face-to-face interviews with 909 people in every DC Ward last summer, was commissioned to create a baseline level of perceptions of public safety among city residents and to promote more collaboration with local police to identify strategies for improving it.

“Public safety is core to a community’s quality of life,” said Pamela Lyons, CPDC Senior Vice President for Community Impact Strategies. “Our goal with this survey is to identify what we need to do to strengthen partnerships between residents who live in communities across the city and the law enforcement officers who are supposed to protect them. Residents are ready to build stronger, trusting relationships with police and work together with them to create safer neighborhoods for themselves and their families.”

How strong are relationships with local police?

The survey findings come amid heightened concern about rising rates of homicides in major cities nationally. While data from the DC Metropolitan Police Department show that property crime is down and violent crime is level in the District as compared to a year ago, there has been a troubling spike in homicides. According to a recent report for the Department, between 2014 and 2015, there was a 54% increase in the number of homicides across DC with the increase mostly concentrated in the Northeast and Southeast quadrants. Between January and May of 2016, the number of homicides in Ward 7 tripled from the rate during the same period a year ago.

The survey shows that more needs to be done. CDPC offered several recommendations for improving public safety and community police relations, including:

CPDC launched the survey following a number of shootings on its properties in Ward 8. These incidents increased awareness of and concern about the safety and security of residents who live there as well as in surrounding neighborhoods. CPDC is leading a “Collaborating for Prevention” initiative to foster community-driven public safety plans so residents who work, live and play on their properties can thrive. CPDC is seeking funding to convene three community listening sessions during summer 2016. These sessions will focus on showing survey results and processing recommendations that could lead to the development of public safety plans.

“As a community developer that makes heavy investments in housing in Ward 8, we have a role in helping residents find their voice to create safer places. The findings from this survey offer an opportunity for residents and police to see where the problems are and work together toward solutions that can result in better and improved communications and levels of trust,” said Lyons.

About Community Preservation and Development Corporation:
For over 25 years, CPDC has served D.C., MD and VA as a leading not-for-profit real estate developer through the acquisition and redevelopment of award-winning affordable housing. We specialize in mixed-income and mixed-use developments, historic preservation, adaptive reuse and are recognized for innovative financing, green building design and public-private partnerships.

With more than 9,000 residents in over 5,000 apartment homes, CPDC is committed to the long-term success of our portfolio and our residents. We deliver innovative Community Impact Strategies (CIS) designed to help individuals and entire neighborhoods grow and thrive. CPDC is a community developer and proud member of NeighborWorks America, the nation’s leading trainer of community development and affordable housing professionals.

About Council for Court Excellence:
Formed in Washington, DC in January 1982, CCE is a nonprofit, nonpartisan civic organization whose mission is to improve justice for the DC community. CCE is the research partner for the Collaboration. For over thirty years, CCE has been active in public safety issues; this has included surveying residents in the Trinidad neighborhood regarding public safety strategies being employed, developing policies to reduce recidivism and improve outcomes for returning citizens, and working with lawmakers and administrators to ensure the justice systems DC relies on are fair and effective.

About Local Initiatives Support Corporation:
For more than three decades, LISC has connected local organizations and community leaders with resources to revitalize neighborhoods and improve the quality of life for residents. LISC is dedicated to helping neighborhood residents create healthy and sustainable places of choice and opportunity – good places to live, work, raise children and conduct business. Since 1994, LISC’s Community Safety Initiative has supported teams of community developers and law enforcement working to reduce crime and improve vitality in neighborhoods nationwide.