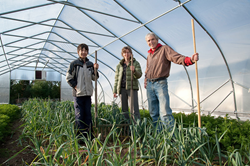 The Richards Family of Am Braigh Farm

The moveable greenhouse option really gives us two greenhouses for the price of one,” adds Richards. ”Plus, they help us avoid the pest buildup/weed problems that come with stationery greenhouses.

With four Rimol Greenhouses and a newly constructed self-serve store, Am Braigh Farm now provides the rural town of Mono, Ontario with fresh, local produce all year long. The only problem for Jamie Richards, owner of Am Braigh Farm, is keeping up with demand.

Back in 1992, Jamie brought Am Braigh Farm with the plan to fix up the neglected farmhouse, grow his own food on the three acre plot, and live a quiet life as a teacher in a small Canadian town. He knew that a growing operation in a region that spent much of the year in the dark, frigid cold would be a challenge. But it was one that he was more than willing to accept.

Richards himself handled nearly every challenge of bringing the farm back to life. But what he had some help with was the naming of the farm. Richards wanted the name to speak to two inherent features of the farm: the location -- nestled high in the Headwaters Region that feeds four major Southern Ontario rivers -- and the spiritual aspect of growing food itself.

Trying to come up with a name that spoke to both of these features, Richards asked his aunt -- from the Gaelic-speaking region of Wales -- to translate the term “higher ground” from English into Gaelic. And so began the story of Am Braigh Farm.

Fast-forward 16 years and the name seems to have been something of a good luck charm. In 1999, Richards placed an advertisement for a boarder. Nancy Ernst moved in not shortly after. And now the pair is not only happily married with a thriving organically sustainable operation, but their son Aidan has become a major contributor to the labor on the farm, including his tireless efforts to manage the more than 200 tons of compost per acre spread on the farm’s beds each year.

It’s not easy to facilitate year-round vegetable production in such harsh conditions. But it is one that Richards has mastered through trial and error and by studying the work of Eliot Coleman and Jean-Martin Fortier -- both celebrated authors and pioneers of four-season farming.

He also credits the introduction of four Rimol Greenhouses as the reason he now offers 30 different types of vegetables during the summer and 20 different vegetables throughout the harsh Ontario winters.

“Our yields are up about 30%,” Richards notes. “And our yields per acre are now about $80,000 thanks in part to the multiple harvests per year from our greenhouses.”

“The moveable greenhouse option really gives us two greenhouses for the price of one,” adds Richards. ”Plus, they help us avoid the pest buildup/weed problems that come with stationery greenhouses.”

Many of his winter crops such as spinach, radishes, leeks, and salad greens can withstand temperatures that straddle the freezing mark. But because the Rolling Thunder is able to cover twice the ground of a stationary greenhouse, Richards can provide protection to twice the crops at intervals throughout the season. As a result, has been able to increase production year over year -- with more plans to expand the operation in the future.

After working out the kinks of growing through the worst of winter weather, Richards actually notes a few advantages of this strategy. This silver lining includes reduced water usage due to the decreased evaporation levels during the winter and a whole lot less weeding without the sun fueling the growth of these unwanted inhabitants. Though crop production slows dramatically during the winter, Richards can always find the bright spot in any scenario.

Richards now devotes all of his time to managing and growing the farm. He retired two years ago after teaching at a local high school where he was the head of the history and geography departments, and where he ran the school greenhouse program in his final years. This also included an initiative to turn the school’s courtyards in to gardens. Today, these gardens supply the culinary arts programs that operate a pair of student-run cafeterias and provide staff members with fresh produce.

Just as it is at the local high school, the future is bright on Am Braigh Farm. The farm's newly finished store not only sells harvested vegetables, but eggs, homemade soups, and fresh-baked breads. The family-run operation continues to explore the diversity of crops that can be grown year-round with little to no supplemental heat sources. And according to Richards, they never stop learning how to maximize the productivity of the farm’s greenhouses through creative use of space and a crop rotations. Welcomed news for the locals that can never seem to get enough of their freshly grown vegetables.

In 1994, Bob Rimol, owner of Rimol Greenhouse Systems, decided to leave his home state of New Jersey and relocate with his young family to New Hampshire. Bob began working as a greenhouse manufacturer’s representative specializing in structures and systems. However, he soon realized the need to “build a better mousetrap” and set out to customize greenhouse technology in order to better suit the needs of his customers. Bob then founded Rimol Greenhouse Systems in order to provide innovative and quality greenhouse technology for local growers.

Rimol Greenhouse Systems has since developed a number of free-standing greenhouses, benches and an entire line of products to complement the greenhouse structures. Other structures include the movable The Rolling Thunder™, high tunnels, and hydroponic systems. All Rimol Greenhouses are designed to be economical, yet rugged enough to handle the harshest snow and wind conditions experienced in New England and many other regions of the country.