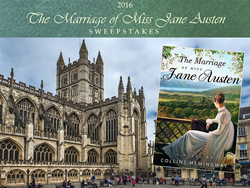 The Marriage of Miss Jane Austen Sweepstakes 2016 was announced today by author Collins Hemingway in celebration of Jane Austen, the world-renowned English novelist, and his new historical novel based on her life. The travel sweepstakes will include two grand prize trips to the beautiful UNESCO World Heritage city of Bath, England, during the annual Jane Austen Festival in September 2016, which celebrates her life and work.

As the one-time home of Austen, the historic city of Bath and the surrounding county of Somerset are favorite destinations for Austen fans from around the world. Bath, in the picturesque valley of the River Avon, is also the setting for several pivotal chapters in Hemingway’s novel reimagining her life. Reviewers have praised The Marriage of Miss Jane Austen for the quality of the writing, its compelling love story, its sensitive treatment of the historical Austen, and its meticulous research.

Participants may enter The Marriage of Miss Jane Austen travel sweepstakes daily from January 4, 2016, through April 14, 2016, for a chance to win either of two grand prizes, depending on whether they reside in the U.S., Canada or Great Britain:

No purchase is necessary for sweepstakes entry.

In Bath, each Grand Prize winner and his/her travel companion will enjoy free two-day admittance to the Jane Austen Festival, which begins Friday, September 9; a three-night stay with daily breakfast at Three Abbey Green, a Four Star Gold Award guest house in the heart of central Bath; a tour of Bath and the surrounding countryside including Jane Austen’s house; the famous Bath Abbey, Roman Baths, the iconic Pulteney Bridge and Weir, Royal Crescent and King’s Castle among other sites; an exclusive tea with Hemingway, author of The Marriage of Miss Jane Austen; and signed copies of his new novel.

“Our sweepstakes is a celebration of Austen and her work in a way that gives back to her many fans around the world,” Hemingway said. “Just as I treat her seriously as a person and an artist in The Marriage of Miss Jane Austen trilogy, this contest provides a serious and meaningful reward for the people who have turned her into one of the most respected and best-loved writers of all time. My goal in the trilogy is to examine life and love for an intelligent woman in 1805, and to honor Austen by imagining how an author of her skills would have tackled topics that were forbidden to women writers in her times.”

Travel must take place September 7, 2016, to September 12, 2016, in conjunction with the Jane Austen Festival in Bath. The U.S. or Canada Resident Grand Prize Winner and his/her travel companion must travel together on the same itinerary and must travel to/from London on the following dates: Wednesday, September 7, 2016, and Monday, September 12, 2016. Air travel will be via round-trip, economy class airfare for two adults to London from a major airport nearest to the U.S. or Canada Resident Grand Prize Winner’s home.

The Grand Prize trips do not include additional travel, meals, or other costs not specifically listed in the Description of Grand Prizes or any miscellaneous expenses, as explained in the Official Rules.

Throughout the sweepstakes, entrants may also win one of four monthly prizes, which will include signed copies of The Marriage of Miss Jane Austen and an exclusive conversation via Skype about the novel with the author.
Residents of the U.S., Canada (excluding the province of Quebec) and Great Britain may enter the contest here. For more information about The Marriage of Miss Jane Austen and author Collins Hemingway, please visit this website. If you would like to “Like” our Facebook page, please do so here.

About The Marriage of Miss Jane Austen
The Marriage of Miss Jane Austen is available online at amazon.com, barnesandnoble.com, authorhouse.com, the Jane Austen Centre in Bath, and Jane Austen Books http://www.janeaustenbooks.net/p/store_29.html#!/~/search/inview=product57551432&keywords=15864&offset=0&sort=relevance). This novel is the first book in a trilogy that examines how a serious romantic relationship would have changed her as a person and a writer, using historical fiction to provide a thoughtful, in-depth look at what life was really like for women in the early 1800s. The trilogy takes the heroine out of rural England and plunges her into what the Regency era was really about: great explorations and scientific advances, political foment, wars that were among the longest and most devastating in European history—and into a serious relationship with a man very much her equal.