Patrick Southern of the Properties by Southern at Liberty Realty, LLC, did it again! 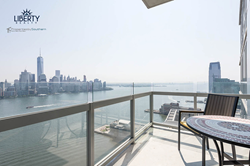 Patrick Southern used his real estate savvy and set a record market price per square foot with the recent sale of a waterfront penthouse condominium at Crystal Point, located at 2 Second Street, Jersey City. This 1,385 square foot, 41st floor, 2-bedroom, 2.5 bath penthouse, situated only 25 feet off the Hudson River, boasts unparalleled skyline views from the GWB to lower Manhattan. The premier building offers unsurpassed finishes and appliances inside each SMART-home-equipped condominium, while showcasing luxury amenities that appeal to New York City’s most discerning Buyer. This transaction further strengthens the connection between the NYC and Hudson County real estate markets, causing NYC Buyers to notice all the Gold Coast has to offer.

Southern learned of the owner’s interest to sell and set up a face to face meeting with the owner to discuss listing this distinctive property. On a Thursday afternoon in September, Southern boarded a flight from Newark to Toronto and secured the $2.2m listing. After marketing the signature unit for just 21 days, a New York City Broker submitted the winning bid to Southern on behalf of his New York City client, which ultimately closed at a sale price of $2,015,000 or $1,455/sf, according to HCMLS records.

Patrick Southern began working under the umbrella of Liberty Realty at their downtown Jersey City office in 2003. He immediately understood how to offer exceptional professionalism and results to his clients and customers. He earned the Platinum Level Circle of Excellence Award from Hudson County MLS for the last six years consecutively, after reaching Gold in 2008 and Silver in 2004-2007. Southern is on track to reach the coveted Platinum level again this year, while leading the licensed realtors on his team to reach new heights as well. Mr. Southern can regularly be found skillfully working closely with Sellers and Buyers, but also volunteering his time, speaking to rooms full of real estate professionals about how to succeed in this business. While Southern’s office is now situated in the Liberty Realty Corporate Center in Hoboken, he maintains an especially close eye on the Jersey City and Hoboken markets.

When not at the office, Mr. Southern can be found doting on his wife and two daughters.