CodingFTW, a group dedicated to diversity inclusion in technology won $5000 for their IoT "hack" at AT&T Developer Summit. 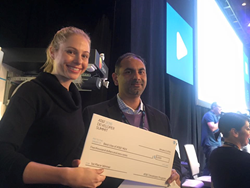 Sarah Austin accepts check on behalf of the team.

Our team discussed how sometimes we get discouraged from going to events because we don’t want to go alone. We wanted to create an app for making friends to attend events and meet people with similar interests.

CodingFTW, a team of female coders, announced the launch of “Rally” an app powered by the Ticketmaster API.

At the AT&T Devsummit Hackathon in Vegas, the CodingFTW team of female coders built over the course of 24 hours an app focused on bringing people together to experience music, magic, sports, and other events. “Our team discussed how sometimes we get discouraged from going to events because we don’t want to go alone. We wanted to create an app for making friends to attend events and meet people with similar interests,” said Sarah Austin founder of CodingFTW.

The Ticketmaster API allows for the discovery of events that match a large variety of interests from Pop Music, to Monster Trucks, and everything in between. “Millennials are focused on experiences, and we didn’t think that Tinder was serving a large segment of the population that either want someone to go to an event with because they are single, or because their significant other doesn’t share the interest,” explained Peera Thongsilp, a CodingFTW team member.

The app, “Rally” leverages WebRTC technologies to allow video conferencing between users without the need to share contact information, a feature that protects the privacy of users. Using the personality profile API from BroadListening.com the app shows insights in to the personality of the people users are matched with so they can determine if they would enjoy spending time with each other.

By demonstrating how AT&T’s M2X technology for IoT could be used as a way to protect user data, the CodingFTW Team won the First Place Prize from the AT&T Developer Program. The feature allowed data about what Ticketmaster events were trending with app users, safely and securely with zero risk of exposing personal data. “I don’t think the judges expected anyone to do something like this,” said CodingFTW team member Caitlin McDonald, “they were really thinking of IoT as small devices, but Big Data comes from a lot of sources, and we think that security should be a primary feature in any app that consumers use for messaging, and interacting with others.”

Ticketmaster is a proud sponsor of CodingFTW, a group dedicated to the advancement of women, and the encouragement of diversity inclusion in technology.

You can learn more about Rally at RallyTheCrew.com

ABOUT CODINGFTW:
In an effort to accelerate diversity in the technology sector, CodingFTW supports education for girls interested in computer science. CodingFTW is a non-profit organization promoting inclusion through education coding classes at the Boys and Girls Club and YMCA.

ABOUT TICKETMASTER: Ticketmaster is the global market leader in live event ticketing, digital marketing, and mobile fan engagement tools that drive over 450 million ticket transactions per year. Through exclusive partnerships with thousands of venues, artists, sports leagues, and arts and theater tours, Ticketmaster delivers unparalleled access to the most iconic live events to millions of fans worldwide. Ticketmaster is a division of Live Nation Entertainment, the world’s leading live entertainment company. Information about the API is available here.