Lucid Meetings Releases Updated Statistics about Meetings in the US

Lucid Meetings extensively researched the number, effectiveness and cost of business meetings in the United States and found that most statistics are quoted incorrectly. 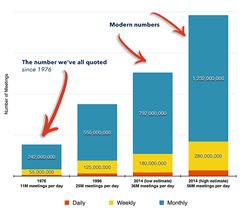 Old vs New Number of Business Meetings in the US

When business owners and managers assume that working to improve meetings is largely pointless, they turn to interrupt-driven technology such as email or group chat, and this can be a much bigger hit to productivity.

For 40 years, authors of books, magazine articles and blogs have declared that the business world is having too many meetings. Many of the same authors state that up to 50% of these meetings are a waste of time, costing the US $37 billion dollars annually.

Lucid Meetings' co-founder, Elise Keith, has spent over 3 years writing about meetings and researching these statistics, and she found that many of the numbers quoted in popular media are unverified. She published these findings in a recent blog post titled "A Fresh Look at the Number, Effectiveness, and Cost of Meetings in the U.S.”

According to most articles about meetings, Americans are having 11 million meetings per day. This statistic has been quoted in over 50 publications from 1976 through 2015 without any adjustments. In 1996, another source claimed that there are over 25 million meetings every day in the United States.

Depending on how you calculate growth since these numbers were published, a more realistic modern number is between 36 million and 56 million meetings every day in the US. This means that Americans are actually meeting at least 3 times more than reported.

The majority of articles written about meetings claim that 50% are unproductive. However, findings in Keith’s report show that there is little research into the facts about meeting effectiveness, so these claims are unfounded. Much to the contrary, the largest scientific study to date reports that respondents thought most of their meetings were quite productive.

When measuring the cost of ineffective meetings to the US economy, the most quoted statistic is $37 billion dollars wasted per year - a number that first surfaced in 1989. In today’s numbers, depending on how you calculate waste, the new estimate for the cost of wasted meetings falls somewhere between $70 and $283 billion dollars per year.

Some companies have banned meetings altogether because of these numbers, and this may be to their detriment. "I learned an enormous amount researching this article, and have had to revise some of my own beliefs about meetings in the process,” says Keith. “When business owners and managers assume that working to improve meetings is largely pointless, they turn to interrupt-driven technology such as email or group chat, and this can be a much bigger hit to productivity."

The limits of research only stretch so far, and Lucid Meetings has decided to conduct their own 5-minute survey that asks direct questions about how often and how well people meet.