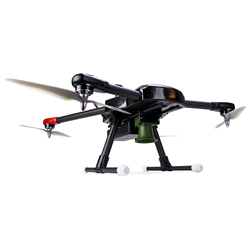 ...never before has something this advanced been released exclusively for the purpose of bird control.

2016 marks the release of the newest form of extremely effective humane bird control: the ProHawk UAV™. Bird-X reports on its newest design.

“After an extensive period of research and development, the testing phase is finally complete and the new drone is available for sale,” stated Dennis Tilles, President of Bird-X.

The ProHawk UAV drone features fully autonomous flight, meaning limited man hours. This is the first drone created specifically for bird control to offer this feature. The operator instead sets a GPS flight path with the included software, selecting the altitude, distance, and other factors. The unit can also be controlled with a remote control, which can be switched back and forth with autonomous flight.

Birds are repelled by the unit thanks to a sonic sound unit built directly into the unit, terrifying birds with Bird-X’s naturally recorded, proprietary combination of predator calls and prey bird distress cries, as well as Canada goose cries, making this the most effective device on the market. In addition, the unit creates a terrifying physical presence to pest birds further mimicking a predator bird in order to keep birds from creating dangerous situations.

The unit itself is made of robust carbon fiber, which sets it above plastic models that often wear and break with use. Camera options are available including recorded or live feed video, allowing the user to get a real bird’s eye view.

Additionally, the unit is extremely intuitive and easy to use. Stuart Wilkins, National Account Manager at Bird-X, stated, “The new drone is extremely user-friendly and features fully autonomous flight. It takes an extremely complicated process and makes it easy for anyone to use.”

Mr. Tilles added, “We’ve all seen drones in the news with uses ranging from surveillance to package delivery. We’ve been using drones for years to keep birds out of unwanted areas, but never before has something this advanced been developed exclusively for the purpose of bird control.”

Bird-X has spent over 50 years protecting public areas from over 60 bird-spread transmissible diseases. The leading international brand of humane bird control solutions, the Chicago-based company manufactures a complete line of unique bird control products, protecting the health of humans, wildlife, and the environment by deterring birds from unwanted areas without harming them.

ProHawk UAV from Bird-X, Inc.The first drone of its class for use in bird control

ProHawk UAV from Bird-X, Inc. back viewThe first drone of its class for use in bird control

ProHawk UAV from Bird-X, Inc. Remote ControlThe first drone of its class for use in bird control