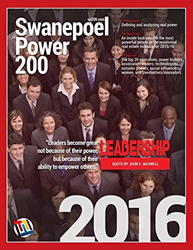 The annual Swanepoel POWER 200 2015/16 ranking the most power people in residential real estate was released today. Leaders from all the largest real estate companies in the United States and Canada, including Realogy, Zillow, Berkshire Hathaway HomeServices, Keller Williams Realty, RE/MAX, Coldwell Banker, Move, Inc., and the National Association of REALTORS® are represented.

Holding the number one spot for the third consecutive year is Richard A. Smith, chairman and chief executive officer of Realogy Holdings. Realogy owns many of the county's leading brands, including: Coldwell Banker, Century 21, Sotheby’s International Realty, ERA Franchise Systems, Better Homes and Gardens Real Estate, and ZipRealty. With approximately 13,600 franchised and company-owned offices, and over 250,000 brokers and agents worldwide, Realogy touches one out of every four home sales in America.

Moving up one spot to the second most powerful person in real estate is Ron Peltier, chairman and chief executive officer of HomeServices of America, a wholly owned subsidiary of Berkshire Hathaway. HomeServices posted solid growth year over year while continuing to add new companies in 2015, the largest of which was $2.5 billion First Weber in Wisconsin, pushing their total agent count to over 70,000, generating over 550,000 transactions annually.

Zillow Group chief executive officer Spencer Rascoff, Gary Keller, co-founder and chairman of Keller Williams Realty International, and Dale Stinton, chief executive officer of the National Association of REALTORS® (NAR) round out the Top 5. Stinton, up from number 6 last year, is credited for his guidance that enabled NAR to make a number of key strategic moves in 2015 that are expected to impact all 1.17 million REALTORS®.

Moving up in the largest number of positions and breaking into the top 20 are Chris Heller and John Davis, the chief executive officer and president of Keller Williams Realty who took office a year ago and now jointly head up the 131,000 agent international franchise as well as Geoff Lewis, the newly appointed president of RE/MAX, the worlds largest real estate group based on transaction count.

The effort behind the SP200 exceeds 400 hours of focused research, face-to-face meetings with most people on the list, an analysis of all companies, and a 20-hour T3 Team deliberation. The project is led by New York Times best-selling author Stefan Swanepoel. His 30th book was published in 2015, the D.A.N.G.E.R. Report (Definitive Analysis of Negative Game Changers Emerging in Real Estate) and was widely acknowledged as the most comprehensive study of the residential industry ever made. According to Swanepoel, "the residential real estate industry is booming with an abundance of very experienced and capable Baby Boom leaders, most of whom are male. In the highest places of leadership diversity is lacking (only 5.5 percent) as are the number of females (only 20 percent). Even Generation X has not yet really stepped up to the plate."

Standouts on the other SP200 lists include Bruce Zipf who, as president and chief executive officer of NRT LLC with over 47,700 agents in 790 offices that are responsible for over 310,000 home sales worth an astonishing $156 billion, is placed atop the Power Broker list. Helen Hanna Casey, who is ranked as the Most Powerful Woman in Real Estate, manages the $12 billion, third-generation, conglomerate Hanna Holdings alongside her brother. The Top Outside Powers in real estate include numerous household names like Richard Cordray (Director of the Consumer Financial Protection Bureau), Rupert Murdoch (Executive Chairman of News Corp) the company that acquired Move, Inc. and Realtor.com, Janet Yellen (Chair of the Federal Reserve), and Melvin Watt, Head of the Federal Housing Finance Agency.

All nine SP200 lists, including the overall POWER 200, can be viewed in detail and by category, at sp200.com.

The Swanepoel | T3 Group has been one of the nation's leading research firms since 1998 and is responsible for the publishing of the annual Swanepoel Trends Report, the annual Swanepoel Power 200, the T3 Tech Guide, and a number of national studies such as the D.A.N.G.E.R. Report (Definitive Analysis of Negative Game Changers Emerging in Real Estate). The group also hosts the annual T3 Summit (USA) and T3 Summit (Canada), the real estate industry's two foremost leadership summits.