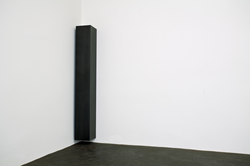 “Graphite was known as a preparatory material until the modernists of the twentieth century began presenting graphite drawings as finished works of art,” says Georgia O’Keeffe Museum Curator Carolyn Kastner.

Susan York’s cast graphite sculpture and large minimalist drawings will be featured at the Georgia O’Keeffe Museum beginning January 21st, 2016. In Carbon, York’s work will be installed throughout galleries devoted to O’Keeffe’s work.

York, a Santa Fe based artist, works primarily in graphite. She is best known for her cast graphite sculpture and large-scale graphite drawings of asymmetrical forms on paper. Her sculptures feature a highly finished surface requiring days of polishing. In both the drawings and sculptures, the work explores and blurs the distinctions between two- and three-dimensional artwork while drawing attention back to the most basic act of art practice--drawing.

“Graphite was known as a preparatory material until the modernists of the twentieth century began presenting graphite drawings as finished works of art,” says Georgia O’Keeffe Museum Curator Carolyn Kastner. The Museum’s presentation of contemporary artists such as Susan York explores the continuity of modernist influence in the twenty-first century.

As a high school student in New Mexico, Susan York wrote Georgia O’Keeffe a letter and O’Keeffe sent her a response. “There were very few women artists at that time,” says York, “and in New Mexico we were lucky to have Georgia O’Keeffe as a living artist and example. O’Keeffe was a woman who was able to follow her vision in a big way: both as a modernist and linking the New Mexican landscape to her work.”

York is represented locally by James Kelly Contemporary and shows throughout the United States and Europe, but this is York’s first time exhibiting at the Georgia O’Keeffe Museum. She welcomes the opportunity to place her work in conversation with O’Keeffe’s. “One thing we share is a distillation of form, that is our common ground” says York.

Carbon will be installed within a new series of galleries devoted to significant periods in Georgia O’Keeffe’s life and work, as well as her artistic legacy and influence.

###
About Susan York:
Susan York is a contemporary American artist and minimalist sculptor. She received her BFA from the University of New Mexico in Albuquerque, NM and her MFA from Cranbrook Academy of Art in Bloomfield Hills, MI. Now based in Santa Fe, NM, York channels the vast expanse surrounding her, into post-Minimalist sculptures and drawings. For more information about the artist, please visit http://www.susanyork.com