New Feature in Genetec™ Security Center Allows End-Users to Connect Cameras from Multiple Facilities and Locations to Build a Centralized Command Center, as Demonstrated by the Los Angeles Police Department for the Special Olympics 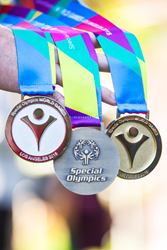 Without Genetec™ Security Center and Federation™-as-a-Service, we would not have been able to secure the same level of awareness during the Special Olympics World Games

Genetec™, a manufacturer of open-platform, unified IP security solutions is today highlighting its Federation™-as-a-Service (FaaS) feature, which allows organizations who maintain multiple distributed security systems to centralize their monitoring operations to one location and reduce the operational costs associated with monitoring and maintaining multi-site systems.

The FaaS cloud-based service, introduced in Security Center 5.3 (SR 2), and now an integrated feature in the newly-availalbe Security Center 5.4, can be set up to monitor events, status information, and alarms from video devices, doors, automatic license plate recognition (ALPR) cameras, and intrusion panels between all participating sites in real-time, while also allowing independent sites to maintain local autonomy of their system.

Since GenetecTM hosts and manages its Federation™ infrastructure in the cloud, FaaS helps minimize on-site hardware and simplifies the administration and maintenance required to manage a central monitoring system. This was one of the reasons why the Los Angeles Police Department (LAPD) decided to use FaaS to help ensure the security of athletes and attendees of the 2015 Special Olympics World Games (LA2015).

During the 12-day event, the LAPD leveraged FaaS to connect its command post to monitor over 400 video cameras that were spread throughout multiple venues including, the University of California, Los Angeles (UCLA), the University of Southern California (USC), and select athletic complexes and event facilities in Los Angeles and the nearby city of Long Beach. With many of the sites already outfitted with their own Security Center system, and managed by their respective police and security forces, installation of the service was easy: no additional on-site servers were required, and the cloud-enabled Federation™ feature facilitated a seamless connection across all the distributed sites.

Controlling access to systems and maintaining the privacy of certain cameras was key in forming a successful partnership between everyone involved. Federation™-as-a-Service enabled all stakeholders to define which cameras were shared, which operators could access them, how far back operators would be authorized to view recorded video, and what level of control the LAPD would have over the PTZ cameras. As the LAPD needed to be cautious not to overload the network at the command post, it was also able to cap the video stream quality when multiple cameras were being viewed, helping to limit the bandwidth required.

“Without Genetec™ Security Center and Federation™-as-a-Service, we would not have been able to secure the same level of awareness during the Special Olympics World Games. We were able to quickly setup a centralized monitoring facility that connected us to the cameras across each venue. Genetec™ was instrumental in making our unified command post work and without the Genetec™ solutions in place, we would not have been able to function as efficiently as we did during those 12 days,” said Dennis Kato, LAPD Commander of the Special Olympics World Games Organizing Committee.

A detailed case study is available from: http://www.genetec.com/solutions/resources/los-angeles-police-department.

About Genetec Inc.
Genetec™ develops open-platform software, hardware and cloud-based services for the physical security and public safety industry. Its flagship product, Security Center, unifies IP-based video surveillance, access control and license automatic plate recognition (ALPR) into one platform. A global innovator since 1997, Genetec™ is headquartered in Montreal, Canada, and serves enterprise and government organizations via an integrated network of resellers, integrators and consultants in over 80 countries. Genetec™ was founded on the principle of innovation and remains at the forefront of emerging technologies that unify physical security systems. For more information about Genetec™, visit: http://www.genetec.com
--ends--