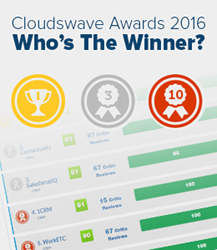 It can be tough to make up your mind about the software or application that will solve your everyday issues. The Cloudswave Awards ranking of business software and SaaS applications aims to help SMBs make the right choice using the Cloudswave Score.

Cloudswave’s seasonal ranking of the top 10 best CRM software for Q1 of 2016 has been released. The ranking is based on the Cloudswave Score, a weighted average score that captures the essence of multiple critic reviews into one number. It takes into account various metrics, such as the date of the review, quality of the review source, as well as the total number of reviews. It is the "Metacritic's Metascore" for Business Software.

Topping the list of the best CRM solutions is Close.io. This web-based software is specifically designed for salespeople, but it also features commendable Task Management, Lead Management, VoIP and CRM capabilities. Contactually, an email-based CRM solution, bagged the second spot in the rankings. The software actively suggests who to follow up with based on the last text message, phone call or email sent by the user. SalesforceIQ, formerly known as RelateIQ, secured the third rank courtesy of its array of features that automate, simplify and extend the way users connect with expert connections.

The goal of the ranking is to provide businesses with valuable data to help them choose the right CRM software for their needs.

According to Cloudswave’s CEO and Founder, Reda Sedrati, “It can be tough to make up your mind about the software or application that will solve your everyday issues; it's like trying to find that one missing piece to the puzzle that is your company. The Cloudswave Awards ranking of business software and SaaS applications aims to help SMBs make the right choice using the Cloudswave Score; which we like to refer to as the "Metacritic's Metascore" for software evaluation. Relying on experts' positive and negative experiences is a good push in the right path to finding the missing piece to your puzzle.”

Close.io achieved the highest Cloudswave Score of 94. Although the number of critic reviews received was lower than some of the other software on the list, all the reviews were favorable and therefore making it the undisputed best CRM software for 2016. Contactually received 87 critic reviews, 89% of which were favorable, giving it a score of 93 and the second spot in the rankings. SalesforceIQ, the third best CRM software, achieved a Cloudswave Score of 91; it received 86% favorable reviews.

Along with rankings for the CRM category, Cloudswave has also released its updated rankings showcasing the top 10 business applications in the Project Management, Accounting, Billing and Invoicing, as well as SEO & SEM categories, among others. For more information about the Cloudswave Awards, please visit their website, or contact yasmina(at)cloudswave(dot)com.

Founded in 2012, Cloudswave is a business software directory that uses the Cloudswave Score as a ranking factor to determine the best software in different categories. Initially, the website was dedicated to offering attractive software deals, but now helps businesses make educated software selections. Headquartered in Montreal, Canada, Cloudswave’s growing team members are all highly committed and dedicated to building a reliable platform that helps organizations and individuals find the truth in data.