Proceedings of the IEEE has released a special issue on the evolution of Electronic Design Automation (EDA) and its future developments. The 15-article special issue has brought together for the first time multiple perspectives on the future of EDA and the challenges ahead with contributions from a variety of prominent authors. 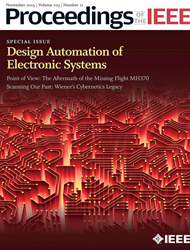 Electronic design automation (EDA) offers sophisticated tools to help engineers orchestrate such layouts, whose complexity has been growing over the years.

Design automation is essential to the advancement of all engineering disciplines. Without it, large systems would never have been enabled as replacements of standard computer systems architectures.

Proceedings of the IEEE, the most highly cited general-interest journal in electrical engineering and computer science, has released a special issue on the evolution of Electronic Design Automation (EDA) and its future developments.

The issue, led by four world-leading guest editors, Robert Brayton, Luca P. Carloni, Alberto L. Sangiovanni-Vincentelli, and Tiziano Villa, has brought together for the first time multiple perspectives on the future of EDA and the challenges ahead with contributions from a variety of prominent authors.

“Design automation is essential to the advancement of all engineering disciplines,” says Professor Brayton, who received his Ph.D. in mathematics from the Massachusetts Institute of Technology (MIT) and is an IEEE Fellow. “We expect its importance to grow continuously with the assistance of automation and the development of new technologies. Without EDA, large systems such as massively parallel and distributed systems, would never have been enabled as replacements of standard computer systems architectures.”

Highlighted papers from the issue include:

“A Platform-Based Design Methodology with Contracts and Related Tools for the Design of Cyber-Physical Systems” by P. Nuzzo, A. L. Sangiovanni-Vincentelli, D. Bresolin, L. Geretti, and T. Villa suggests a platform-based design methodology that shows how contracts can address the complexity and heterogeneity of cyber–physical systems by providing formal support to the entire system-design flow in a hierarchical and compositional way.

“System Design Automation: Challenges and Limitations” by J. Sifakis discusses to what extent the VLSI-design paradigm can be transposed to hardware/software systems that interact continuously with an external environment, through the application of the principles of separation of concerns, component-based design, semantic coherency, and correctness by construction.

“Toeplitz-Plus-Hankel Matrix Recovery for Green’s Function Computations on General Substrates” by R. Y. Zhang and J. K. White illustrates how all elements of an implicitly defined Toeplitz-plus-Hankel (TPH) matrix can be recovered by sampling four or five carefully selected columns, and then using a linear least squares scheme to recover the rest of the matrix.

“From Latency-Insensitive Design to Communication-Based System-Level Design” by L. P. Carloni discusses the challenges of engineering system-on-chip platforms as they have become distributed systems and proposes a new design paradigm to cope with their complexity.

The special issue also covers several papers on synthesis and verification, including:

To learn more about electronic design automation and this special issue, or to see the list of upcoming issues, visit the Proceedings of the IEEE’s website, LinkedIn or Facebook page.

About the Proceedings of the IEEE
Founded in 1912 and first published in early 1913 (originally as Proceedings of the IRE), Proceedings of the IEEE is the most highly cited general-interest journal in electrical engineering and computer science. This journal provides the most in-depth tutorial and review coverage of the technical developments that shape our world, enlisting the help of guest editors and authors from the best research facilities, leading-edge corporations and universities around the world. For more information on Proceedings of the IEEE and the latest ideas and innovative technologies, visit http://www.ieee.org/proceedings, LinkedIn and Facebook.

About IEEE
IEEE, the world’s largest technical professional association, is dedicated to advancing technology for the benefit of humanity. Through its highly cited publications, conferences, technology standards, and professional and educational activities, IEEE is the trusted voice on a wide variety of areas ranging from aerospace systems, computers and telecommunications to biomedical engineering, electric power, and consumer electronics. Learn more at http://www.ieee.org.

Overview of the Proceedings of the IEEE Special Issue on Design Automation of Electronic Systems: Past Accomplishments and Challenges Ahead