A new white paper released by the Lung Institute shows an increase of 10 percent or more in pulmonary function for 48 percent of patients tested after receiving stem cell therapy for COPD, with an overall average increase of 16 percent. 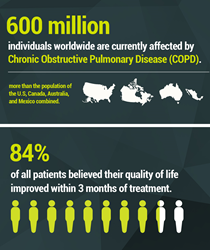 Although research on the use of autologous stem cells is still in its early stages, it has shown substantive progress in treating patients with few, if any, adverse effects.

“Although research on the use of autologous stem cells is still in its early stages, it has shown substantive progress in treating patients with few, if any, adverse effects,” Dr. Coleman stated. “COPD is currently the third leading cause of death in the United States, and we’re giving our patients an alternative option that doesn’t just mask the symptoms.”

Coleman’s white paper summarizes the results of a study where approximately 100 patients with lung diseases were treated using stem cell therapy. Three months after treatment, 84 percent of patients reported an improved quality of life. The average improvement was 35 percent. Additionally, 25 of the patients in this study group were tested for pulmonary function. 48 percent of those 25 patients saw an increase in pulmonary function of over 10 percent, with the average rate of improvement at 16 percent. This sampling of patients represents one of the largest study groups tested in regard to how stem cells affect those with lung diseases.

Lung diseases are degenerative, meaning pulmonary function is expected to decline, making an increase in pulmonary function even more noteworthy. Advancements such as this are why the Vatican hosts an annual conference on regenerative medicine and why the White House recently passed a bill approving stem cell research funding.

Supporters like the White House and Vatican are helping increase awareness as to all of the benefits of regenerative cellular therapy. In an article published on ChristianNewsWire, U.S. Rep. Chris Smith recently stated, “It remains one of the best kept secrets in America that umbilical cord blood stem cells and adult stem cells in general are curing people of a myriad of terrible conditions and diseases in adults as well as children.”

About the Lung Institute

The Lung Institute, founded in 2013, is a leading medical provider of regenerative cellular therapy for lung diseases such as chronic obstructive pulmonary disease (COPD), pulmonary fibrosis and interstitial lung disease in the United States. Based in Tampa, Fla., the Lung Institute currently has clinics in Nashville, Tenn., Scottsdale, Ariz., and Pittsburgh, Pa., with plans to open three new locations in 2016. To date the organization has treated over 1,500 patients, helping them breathe easier in their fight against lung disease. For more information, please visit http://www.lunginstitute.com or call (855) 313-1149.