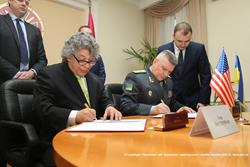 "Together with colleagues from the Ukroboronprom we developed the project, which resulted in the signing of the Memorandum of Understanding with the corporation "Aeros" ...

Los Angeles | Washington D.C. | The Ukrainian State Border Service and California-based Aeros signed a Memorandum of Understanding (MOU) outlining the development of integrated surveillance systems along the State border. The MOU with the Government of Ukraine will be the basis of cooperation with Aeros on collaboration to build electro-optic surveillance systems on the land section of the border. Under the agreement, Aeros will supply equipment and perform work supporting expanded situational awareness and early detection of threats in the maritime section of the border, as well as help modernize integrated information and telecommunication systems. It was also revealed at the signing ceremony that the first Aeros made surveillance system is now on the way to Ukraine to soon strengthen day and night wide-area situational awareness capability for the national border protection agency. The EEWS is set to be transferred to the Azov coast, with Aeros’ CEO Pasternak explaining, “It is an honor to be selected by the State Border Guard Service of Ukraine to partner on this important undertaking to enhance situational awareness, response capability and civilian security.”

Chairman of the State Border Service, Viktor Nazarenko, said that this event is of great importance not only for services but also for Ukraine and for European security in the region, stating, "Together with colleagues from the Ukroboronprom we developed the project, which resulted in the signing of the Memorandum of Understanding with the corporation "Aeros," known for its development of early identification solutions for weapons and moving objects at the state border and maritime area. I am confident that with our partners we will make maritime borders completely controlled, and will continue this work on the land."

Vladislav Belbas, Deputy Director of Spetstehnoeksportu also commented on the agreement for technical assistance, saying, "It is important that the delivery of the first EEWS system was facilitated with the use of state guarantees, a new tool only recently adopted in the 2015 budget. In realizing this initial agreement, the State Border Service demonstrates the service’s modernization and adoption of practices that ensure expedited cooperation.”

Commenting on the signed MOU, Aeros CEO, Igor Pasternak, said that the adopted Statement of U.S. Aid for Ukraine in 2016, was a milestone agreement in confronting troubling aggression by Russian and pro-Russian separatists that will strengthen U.S. cooperation with Ukrainian security agencies, adding, “The collaboration provides urgency strengthening the Ukrainian border, because Ukrainian security is of importance also to American security and civilian protection worldwide. The funds allocated for equipment modernization under the act are designed to strengthen Ukraine’s borders, and this is only the beginning of a continued long-term cooperation.”