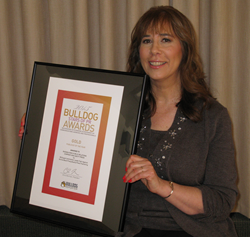 Publicist of the Year Rhonda Rees and her Bulldog Reporter Award

The online piracy of books can happen to anyone. Not just to the famous recording artists or celebrities anymore.

Bulldog Reporter, the PR industry’s most recognized trade journal, has recently announced that veteran public relations expert and author Rhonda Rees had won their coveted Publicist of the Year Gold Award, as part of its Stars of PR competition. Her entry focused on the little-known subject of online book piracy, as it impacts numerous unsuspecting authors. Her global public relations awareness campaign has helped to bring more attention to the issue and has also shed light on this very costly and growing problem. See Bulldog Reporter story.

What makes this special honor unique is that Rees had previously been crowned Publicist of the Year by the Book Publicists of Southern California organization. She had won their IRWIN Award (Industry Recognition of Writers in the News), and used her title as a platform to bring more awareness to this same issue of online book piracy. See Book Publicists of Southern California video.

“The online piracy of books, especially little-known self-published works can happen to anyone. It’s not just the famous recording artists anymore, or celebrities that are being ripped off. It is now impacting the average person in a very big way. Unfortunately, this is the type of crime that doesn’t leave any fingerprints,” states Rees.

According to the Association of American Publishers, the publishing industry as a whole has lost $80-100 million dollars to online piracy annually. From 2009 to 2013, the number of e-book Internet piracy alerts that the Authors Guild of America received from their membership had increased by over 300%. During 2014 that number doubled, yet the matter still receives very little attention.

Rees is hoping that with her latest win as Bulldog Reporter’s Publicist of the Year, her cause will not be forgotten any time soon. She plans to continue the fight, and has made contacts with the Global IP Center, a division of the U.S. Chamber of Commerce in Washington D.C., The Authors Guild of America, the Counterfeit Report Company, the Piracy Trace business, and also with a lawyer from IPWatchdog. All of these groups share her same interest in putting a stop to online piracy.

The Bulldog Reporter competition is a nationwide contest, and is the only program judged exclusively by working journalists, including a Pulitzer Prize winner. The judges come from such respected media outlets as The Washington Post, USA Today, and The Oregonian.

“Our Stars of PR program provides an opportunity for the people behind these award winning campaigns to step into the forefront and be recognized for all their hard work,” states Chris Morrison, President of MediaMiser, Bulldog Reporter’s parent company.

The Bulldog Reporter awards are considered the industry’s highest honor and the pinnacle of achievement in the public relations and communications industries.

Rhonda Rees Publicist of the Year and Author

Bulldog Reporter Stars of PR Publicist of the Year Award