Air Squared has been awarded a contract from the Jet Propulsion Laboratory to design and develop a CO2 scroll compressor that will be used in the MOXIE technology demonstration experiment for the Mars 2020 mission. 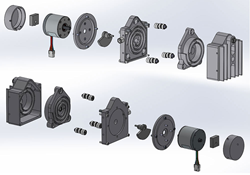 After finishing an extensive paper study that evaluated the feasibility of designing a scroll compressor for the Jet Propulsion Laboratory (JPL), Air Squared, Inc. has been awarded a contract to develop two CO2 scroll compressor designs that will be used in the Mars Oxygen ISRU Experiment (MOXIE) technology demonstration experiment for the National Aeronautics and Space Administration (NASA) Mars 2020 mission.

The primary goal of the paper study conducted in early 2015 was to assess whether scroll technology could be used to meet or exceed the extensive requirements of the MOXIE CO2 compressor. With size, weight, and efficiency all critical aspects of the compressor, the study concluded that scroll technology not only was feasible but also could offer several advantages over competing technologies, such as reciprocating technology.

Air Squared will now develop and extensively test two different scroll designs for the MOXIE technology demonstration experiment. The first, a single-stage scroll design, has the potential for lower complexity and reduced mass. The second, a two-stage scroll design, will offer lower power consumption. Several requirements will be common to both designs, including the following:

-A mass flow rate of at least 100 grams per hour.
-An outlet pressure of at least 760 Torr, with 7 Torr inlet pressure.
-A compressor and motor not exceeding 175 mm in length.
-Full compatibility with the working fluid: 95% CO2, 3% N, and 2% Ar.
-A total mass of compressor, motor, and controller not exceeding 1.8 kg.
-The ability to function in the Martian environment.
-Further improvements in size, weight, and efficiency throughout the development of both units.

The scroll compressors will be extensively tested in 2016 and then integrated in the MOXIE technology demonstration experiment. If successful, one of the two designs will be selected for further development to make the selected design flight-ready for the Mars 2020 mission.

NASA announced the Mars 2020 mission in December 2012. A part of the Mars Exploration Program, a long-term robotic exploration effort on the planet Mars, Mars 2020 is a rover mission with a planned launch in 2020 that JPL will manage.

The mission is the successor to the Mars Science Laboratory rover mission, in which the Curiosity rover successfully landed on Mars in 2012 and continues to operate on the surface of the Red Planet. The rover is the fifth on Mars and, unlike any of its predecessors, will explore the Red Planet. While the rover design is largely derived from that of the Curiosity, with a similar landing system and chassis, the Mars 2020 rover has upgraded hardware and a different payload, featuring seven new scientific instruments that will help NASA look for evidence of life and prepare for future human expeditions.

The seven [this number may change] scientific instruments in the Mars 2020 rover payload will primarily be used to help scientists investigate signs of past life on Mars. MOXIE, however, will demonstrate technology for future manned missions to the Red Planet.

Through a process called solid oxide electrolysis—think of a fuel cell working in reverse—MOXIE will demonstrate the ability to produce O2 from CO2 in the Martian atmosphere. With CO2 representing approximately 96% of the thin Martian atmosphere, the technology could be used to generate breathable air for astronauts while on Mars and potentially provide fuel for their return journey back to earth.

The MOXIE unit onboard the Mars 2020 rover represents a 1% scale model of the O2 processing plant required to support human expeditions to Mars. While manned missions will not be possible until at least 2030, MOXIE will provide scientists with invaluable data to design a full-scale Mars In Situ Resource Utilization (ISRU) facility.

The scroll compressors that Air Squared is developing will play a key role in the success of the MOXIE technology demonstration experiment. The compressor not only requires more power than any other component in the system, it is also the only component with moving parts.

About Staged Design from Air Squared

Air Squared is the industry leader in oil-free scroll design and manufacturing. By introducing a simple design with fewer moving parts, scroll technology has established itself as a highly efficient, very reliable, cost-effective alternative. Through a growing line of compressor, vacuum pumps, and expanders, Air Squared makes the many advantages of oil-free scroll technology available to OEMs and specialty applications worldwide.