New Residential and Mixed-Use Tower Will Become State's Tallest Building at 900 Feet, Standing Along the Hudson Opposite Battery Park City 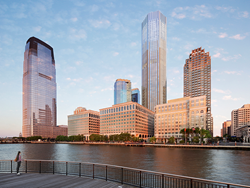 Today Jersey City is developing its own dynamic city, along with a world-class skyline. To play a part in this transformation is quite an honor. - Ming Wu, AIA

Earlier today design team members from Perkins Eastman joined Jersey City Mayor Steven M. Fulop, representatives of the Jersey City Council and Planning Board, developer China Overseas America, Inc., Plaza Construction, and a host of other dignitaries for the groundbreaking of 99 Hudson St. (aka 99 Hudson). At 79 stories tall and measuring 900 feet from sea level, 99 Hudson will be the tallest building in the state of New Jersey, surpassing the 781-foot tall Goldman Sachs building at 30 Hudson. The new tower will comprise nearly 800 condominiums and will further enhance the city's ongoing campaign to “dramatically remake the Jersey City skyline,” according to Mayor Fulop.

As the Jersey City housing market continues to grow at an unprecedented rate, 99 Hudson will become New Jersey’s first large-scale condominium project in more than five years and create an iconic new skyscraper along the Hudson riverfront. The development will include 7,500 sf of new public plazas and open green space as well as key additions to existing commercial and retail storefronts situated along Greene, Grand, and Hudson Streets.

Mr. Ming Wu AIA, Principal with Perkins Eastman, was in attendance along with key members of his design team. Speaking at today’s ceremony, Wu said, “99 Hudson will mark a new milestone for Jersey City’s resurgence as a truly great city in which to live and work. For decades now, people on the west side of the Hudson have marveled at Manhattan’s skyline, but today Jersey City is developing its own dynamic city, along with a world-class skyline. To play a part in this transformation is quite an honor.”

The new tower, once dubbed “the most significant condo project ever in the State,” is a development of China Overseas America, Inc. The development is part of a broader effort by Mayor Fulop’s administration to transform Jersey City into the state’s leading job creator, attract hundreds of millions of dollars in investment to the region, and ultimately make it New Jersey’s largest city in 2016.