New reinstallation at the Newark Museum is part of a two-year celebration of the Museum’s collection of African art. 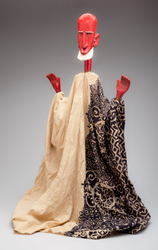 The new galleries will transform the way we think about, view and engage with African art.

The Newark Museum is preparing for the 2017 reinstallation of the arts of Global Africa collection in the Museum’s main gallery on the first floor, which coincides with the centennial of the collection. But in the meantime, there are new works to see in the current galleries located on the second floor, including recent acquisitions. The reinstallation is part of a two-year celebration of the Museum’s collection of African art.

“This project builds upon and extends our long history of collecting and exhibiting the arts of Africa,” said Steven Kern, CEO and Director of the Newark Museum, who initated “100 Years/African Art” last year with the opening of Royals & Regalia: Inside the Palaces of Nigeria’s Monarchs and Hassan Hajjaj: My Rock Stars. “The new galleries will transform the way we think about, view and engage with African art. These acquisitions give visitors a look at what is to come.”

The most dramatic addition is a new gallery dedicated to video art, featuring A Land So Far (2010) by artist Zak Ové, which was acquired by the Museum last year. Based on contemporary celebrations of Carnival in Trinidad, Ové combines footage in mirrored frames to create a kaleidoscopic landscape of intertwining masqueraders. The video begins with daytime parades of masked characters dancing through the streets of the city of Port of Spain, accompanied by the sounds of drumming. It then shifts to the nighttime performances in the hills of Paramin where battling “blue devils” – performers with bodies covered in indigo blue dye – spout streams from lit cans of aerosol, ending with an explosion of flames in the sky.

More new acquisitions are on view in Present Tense, a gallery devoted to the Museum’s collection of contemporary arts of global Africa. The tight rectangular geometry of Serge Nitegeka’s abstract painting Fragile Cargo XV, Studio Study V (2015) captures the shapes and sharp lines of shipping crates, seemingly commonplace objects used in human trafficking, economics and movement. They are a metaphor for physical and psychological displacement, which he himself experienced when his family fled from their home in Burundi to Rwanda due to a civil war and then migrated again because of genocide. Personal history is also mined in a group of photographs by Amalia Ramanankirahina from her 2013 series Portraits de Famille (Family Portraits). These haunting images digitally manipulate family photographs from colonial-era Madagascar, shrouding their faces in a symbolic gesture to traditional Malagasy cultural practices. These works are joined by earlier acquisitions of paintings, including Wosene Worke Kosrof’s Berkeley III (2003) and Sokey Edorh’s Les Gendarmes d’Afrique (1996-2006).

Featured elsewhere in the gallery are recent gifts to the collection. A factory print textile collected in Monrovia, Liberia, circa 1969 celebrates the impact of “swinging sixties” fashion on the continent. This work is part of a larger donation of 25 factory print textiles, an important addition to the Museum’s internationally known collection of African textiles. It complements one of the first textiles collected by the Museum, an exceptional example of weaving by a Dyula artist from Côte d’Ivoire acquired by Newark Museum founder John Cotton Dana in 1928, now on view as well. At the entrance to the galleries are another gift to the collection: a group of puppets representing the diversity of characters in Sogo bò, a puppet tradition performed in south-central Mali. Sogo bò – translated as “the animals come forth” – is inspired by the everyday world and examines the human condition, often in a humorous way, through performances organized and performed by young men in youth associations.