BioEden the specialist tooth stem cell bank today announce that their services will be available in Croatia. The company aims to improve healthcare services by providing more parental choice, and see their service as a complimentary one to Croatia's public cord blood bank. 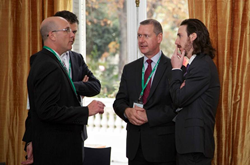 'The service provided by BioEden guarantees that the stem cells are securely stored and that they are kept for use only by the donor.'

Ten years ago the Ana Rokavina Foundation was created, and one year later a national humanitarian campaign was launched resulting in the first public cord blood bank in Zagreb.

Croatian parents have the opportunity to bank cord blood, but it is not without its difficulties. The system of cord blood banking in Croatia does not allow the samples to be traced back to the donor, therefore when a stem cell match is needed, the search can be difficult and cause delays.

Tony Veverka Group CEO says, 'The service provided by BioEden guarantees that the stem cells are securely stored and that they are kept for use only by the donor. When the stem cells are needed in therapy, the release of the cells is swift, being shipped directly to the treating doctor or hospital. The stem cells found in naturally shed baby teeth are a different type of cell to those found in cord blood, and they have the unique ability to morph into many other cell types, meaning that they potentially can treat more conditions'.

The launch into Croatia coincides with BioEden's 10th Anniversary. In 2006 they opened their first laboratory in Austin Texas, and are now operational in 25 countries around the world.