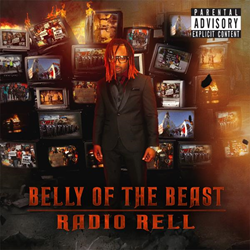 The mixtape features 7 tracks, including those below:

Radio Rell is currently seeking press opportunities, interviews, features, and more. He can be reached through his official Twitter page.

About Radio Rell: Radio Rell is a talented artist who was born to perform. At a young age, Radio Rell was drawn to music. Being a listener of music, made Radio Rell want to be in the music business with such a passion. This first taste of music gave Radio Rell the drive to pursue music. Radio Rell started writing lyrics and that jumpstarted it all. Music seems to be the best way to express the true personality behind Radio Rell. The sky is the limit because Radio Rell’s music is so inventive and current. Having the best blend of music and lyrics is the reason Radio Rell wants to take on the world. Through Radio Rell’s lyrics, the talent can be appreciated. Combining a strong work ethic with aggressive self-promotion, Radio Rell is heading toward greatness. Radio Rell is to be featured in magazines that deal with music and life. Radio Rell would love to work with advertisers and charities. Through years of refining, Radio Rell is now an amazing performer. Radio Rell is willing to take advantage of any opportunity to showcase talent. Performing for an audience is what motivates Radio Rell. Radio Rell is looking forward to going on tour. Radio Rell’s new single is definitely something to talk about. The music points out the mysteries in life and the human experience. Inspired by life, Radio Rell is currently working on an album that everyone can relate to. For more info on Radio Rell, visit his official website.