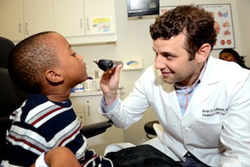 "Flu season can last through April and into May in some years, so it is important for parents to continue to take precautions with their children," said Dr. Kulbersh

The Birmingham pediatricians at Pediatric ENT Associates in Alabama have learned that at the halfway point of the 2015-2016 influenza season, several states have been ranked as high on the outpatient ILI (influenza like illness) according to the Centers for Disease Control in Atlanta. Several cities and states on the east coast, including New Jersey and South Carolina, are reportedly high on the scale, at ten and nine respectively, in week 12 of the current flu season. Nationally, the proportion of ILI outpatient visits is slightly above the national baseline of 2.1%, at 2.8%.

“The length and intensity of each flu season varies from year to year, and it can be difficult to predict how severe an influenza outbreak will be until the season begins, typically around October,” said pediatric ear nose and throat specialist Dr. Brian Kulbersh of Pediatric ENT Associates in Alabama.

Overall, the proportion of outpatient flu-related clinical visits are down for the current season, from roughly 6% last season, and 4.5% in 2013-2014. Geography and population density can also play a role in the incidence of flu-related illness, as in the case of New York, where the statewide concentration is level 1, but New York City ranked higher at level 6.

“Flu season can last through April and into May in some years, so it is important for parents to continue to take precautions with their children, such as encouraging frequent hand washing, avoiding sick friends and classmates, and keeping them home from school if they become sick and scheduling an appointment with a pediatrician at the onset of flu-like symptoms,” added Dr. Kulbersh.