The Small Mammal Brain Preservation Prize has officially been won by researchers at 21st Century Medicine. Using a combination of ultrafast chemical fixation and cryogenic storage, it is the first demonstration that near-perfect, long-term structural preservation of an intact mammalian brain is achievable, thus directly answering what has been a main scientific criticism against cryonics. 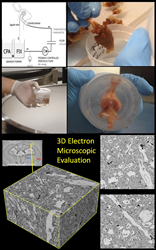 Images of the rabbit brain that won the prize.

Every neuron and synapse looks beautifully preserved across the entire brain. Simply amazing given that I held in my hand this very same brain when it was a vitrified glassy solid… This is not your father’s cryonics.

The Brain Preservation Foundation’s (BPF) (http://www.brainpreservation.org/ ) Small Mammal Prize has officially been won. A team from 21st Century Medicine (21CM) (http://www.21cm.com/ ), spearheaded by recent MIT graduate Robert McIntyre, has discovered a way to preserve the delicate neural circuits of an intact rabbit brain for extremely long-term storage using a combination of chemical fixation, cryoprotectants, and cryogenic cooling. Proof of this accomplishment, and the full “Aldehyde-Stabilized Cryopreservation” protocol, was recently published in the journal Cryobiology and has been independently verified by the BPF through extensive electron microscopic examination. This answers a challenge issued to the scientific and cryonics communities five years ago by the BPF, and carries an award of $26,735. Kenneth Hayworth, a PhD neuroscientist who is president of the BPF and one of the prize’s judges said: “Every neuron and synapse looks beautifully preserved across the entire brain. Simply amazing given that I held in my hand this very same brain when it was a vitrified glassy solid … This is not your father’s cryonics.”

Throughout the contest, the 21CM team was in a tight race with Max Planck researcher Shawn Mikula to be the first to meet the prize’s strict requirements. Although the prize will be awarded to 21CM, a BPF spokesman emphasized that a mouse brain entry submitted by Dr. Mikula also came extremely close to meeting the prize requirements. Dr. Mikula’s laboratory is attempting to perfect not only brain preservation (using a different method based on chemical fixation and plastic embedding) but whole brain electron microscopic imaging as well.

Focus now shifts to the final Large Mammal phase of the contest which requires an intact pig brain to be preserved with similar fidelity in a manner that could be directly adapted to terminal patients in a hospital setting. The 21CM team has recently submitted to the BPF such a preserved pig brain for official evaluation. Lead researcher Robert McIntyre has started Nectome (http://nectome.com ) to further develop this method.

Proponents of cryonics have long sought a technique that could put terminal patients into long-term stasis, the goal being a form of medical time travel in which patients are stabilized against decay with the hope of being revived and cured by future technologies. To that end, over the last two decades cryonics researchers have made progress eliminating ice formation using a technology from mainstream cryobiology called vitrification. Vitrification uses high concentrations of cryoprotectants that allow tissue to solidify during cooling without the formation of ice crystals. When optimally applied, vitrification eliminates damage to cell structures caused by ice formation and has been shown compatible with recovery of biological functioning in small slices of isolated brain tissue. But when applied to whole brains, limitations in diffusibility lead to dramatic shrinkage of the brain’s tissue. Electron microscope images of such brains show dramatic distortions to the delicate neural circuits, and recovery of biological function in whole brains or animals remains far out of reach.

Such difficulties have led a new generation of researchers to focus on a more achievable and demonstrable goal –preservation of brain structure only, without concern for later biological viability. They focus on demonstrating preservation of the delicate pattern of synaptic connections (the “connectome”) which neuroscience contends encodes a person’s memory and identity. Instead of biological revival, these new researchers often envision a future “synthetic revival” comprising nanometer-scale scanning of the preserved brain to serve as the basis for mind uploading.

This shift in focus toward “synthetic” revival opens up new avenues of research and brings the idea of cryonics squarely within the purview of today’s scientific investigation. Hundreds of neuroscience papers have detailed how memory and personality are encoded structurally in synaptic connections, and recent advances in connectome imaging and brain simulation can be seen as a preview of the synthetic revival technologies to come. Until now, the crucial unanswered questions were “How well does cryonics preserve the brain’s connectome?” and “Are there alternatives/modifications to cryonics that might preserve the connectome better and in a manner that could be demonstrated today?” The Brain Preservation Prize was put forward in 2010 to spur research that could definitively answer these questions. Now, five years later, these questions have been answered: As described above, traditional cryonics procedures have not yet been able to demonstrate (to the BPF’s satisfaction) preservation of the connectome, but the newly perfected “Aldehyde-Stabilized Cryopreservation” technique has.

The key breakthrough was the quick perfusion of a deadly chemical fixative (glutaraldehyde) through the brain’s vascular system, rapidly stopping metabolic decay and fixing proteins in place by covalent crosslinks. This stabilized the tissue and, along with other chemicals, enabled cryoprotectants to be perfused at an optimal temperature and rate. The result was an intact rabbit brain uniformly filled with such a high concentration of cryoprotectants that it could be vitrified solid and stored at -135 degrees Celsius. Electron microscope images from across the rabbit brain showed beautifully preserved neural circuits which look identical to fixation-only control brains.

This result directly answers a main skeptical and scientific criticism against cryonics –that it does not provably preserve the delicate synaptic circuitry of the brain. As such, this research sets the stage for renewed interest within the scientific community, and offers a potential challenge to medical researchers to develop a human surgical procedure based on these successful animal experiments.