Hot Tub Suppliers, based in Leicester, Leicestershire, is celebrating after collecting Gold and Bronze Awards at the prestigious British Pool & Hot Tub Awards, hosted by BISHTA and SPATA. 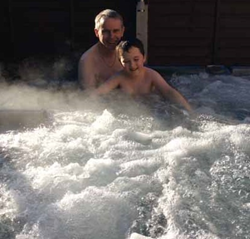 “We used the hot tub to prepare Christian for the operation and it will play an even more important role in his recovery.”

Hot Tub Suppliers, based in Leicester, Leicestershire, is celebrating after collecting Gold and Bronze Awards at the prestigious British Pool & Hot Tub Awards, hosted by BISHTA and SPATA held on Sunday 31st January at the Ricoh Arena, in Coventry. The British and Irish Spa and Hot Tub Association (BISHTA) and the Swimming Pool and Allied Trades Association (SPATA) are the relevant trade associations upholding standards within the Wet Leisure Industry. Rebranded in 2015 the first SPATA awards were won in 1978 and the first BISHTA awards were won in 2008, these well-established awards, are the UK’s number one wet leisure industry accolades.

The Gold award was won by Hot Tub Suppliers in a very special category that celebrates the life changing benefits that hot tubs and spas provide consumers. The award provides the opportunity to really focus on the health benefits of hot tub and spa ownership and how they can make an enormous impact on people’s lives. The Gold award was won, by Hot Tub Suppliers for a hot tub they installed for the family of a brave 8 year old called Christian, who was born prematurely and delivered by emergency caesarean, after doctors discovered that his twin brother had passed away whilst undertaking a routine scan.

Four weeks after his birth, Christian was allowed to leave hospital and go home, his parents thought that the worst battle had been fought and won! Unfortunately 18 months later, Christian was diagnosed with cerebral palsy and his battle started again. He was unable to walk unaided, and his parents were advised that a hot tub with good hydrotherapy would help Christian (whilst they started fundraising for the £50,000 operation which was not funded by the NHS). Christian received his life changing operation in December 2015 and his parents commented “We used the hot tub to prepare Christian for the operation and it will play an even more important role in his recovery.”

Arun Sarna from Hot Tub Suppliers, commented; “We are thrilled to be winners at the British Pool & Hot Tub Awards. The fact that the entries are judged by top industry professionals with exacting standards is a great accolade for our company and highlights the passion that our team puts into every project.”

The awards event brings together BISHTA and SPATA to showcase the best examples of design, construction, installation and innovation in the wet leisure industry.

Chris Hayes, Managing Director of both BISHTA and SPATA, says, “We congratulate all of the winners of this year’s British Pool & Hot Tub Awards. BISHTA represents 111 specialist hot tub companies across the British Isles and SPATA represents 173 companies (mainly from the UK, but with some overseas). We set a high standard for our judges to score each entry on visual impression and technical merit. Meaning that an award won at the British Pool & Hot Tub Awards is very well deserved, and ownership of one or more of these awards stands as a strong endorsement to consumers of the standard of work a winning company offers. Each year the outstanding quality of submissions creates stiff competition. The high quality of the entries provides a fantastic opportunity for showcasing what our members can do for their customers and why it is so important to choose a BISHTA or SPATA member to turn a dream into a winning project.”

The awards evening is held alongside SPATEX, the UK’s largest Pool, Spa and Wellness Show, an event that sees companies from across the UK and overseas, gather to exhibit their finest products and services, along with promoting themselves and networking with colleagues. SPATEX is not only the UK’s largest, but is also the longest running dedicated swimming pool, spa and wellness exhibition, holding its 20th anniversary annual trade show at the Ricoh Arena, Coventry from 31st January to 2nd February 2016.

Chris Hayes commented further, “This year the show has exceeded our expectations, having sold out much earlier than expected. Once again this has led to the show expanding the size and in the third year of being in Coventry, this is an amazing achievement by the SPATEX team. The Ricoh Arena offers purpose-built facilities, which have given us the opportunity to make the show even bigger and better for our exhibitors and visitors and our plan it to continue with this expansion in the coming years.”