Sensors from BLIP Systems, utilizing Bluetooth and Wi-Fi technology, help the city of Portsmouth to monitor the road conditions, measure the impact of road works and events, maximize the effectiveness of diversion routes, to ensure optimal network operation. 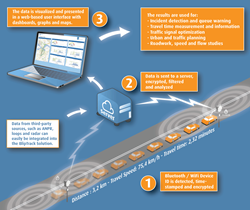 The city of Portsmouth, one of the most densely populated cities in the UK, has monitored journey times and traffic patterns for the last two years, on the city´s most congested roads. The real-time data has helped traffic engineers to better understand traffic flows, improve planning and allow the council to reroute traffic to less congested routes, preventing massive tailbacks before they form.

To help manage the challenges of optimizing and improving the road infrastructure and predict traffic build-up, Portsmouth City Council turned to a mobile technology solution. In 2013, a network of BlipTrack sensors, from Denmark-based information technology company BLIP Systems, was implemented by VAR Smart CCTV, which also is responsible for liaison with the city and their consultants.

In the years the sensors have been up, real-time travel time measurements and road traffic analysis has been conducted on roads for links to the mainland and the M27/A27 east-west corridor. The collected traffic information, from the the 12 cross-city routes, is primarily used for strategic planning tasks, such as identifying problem areas, providing information on the capacity of existing roads and detecting changes in traffic patterns. The power of the solution grows exponentially with the addition of other sensors, allowing BlipTrack to log individual journeys. This enables calculating average speed, exposing unintended routes with a significant number of cars, using small residential backstreets to escape rush-hour traffic and monitoring when drivers are spending significant amounts of time searching for a parking space. Ultimately, the data will help to improve the economic benefits through reduced commuting times and fuel consumption as well as reducing vehicular emissions.

Commenting on the solution, Portsmouth City Council Traffic Engineer Lee Gilbert said: “The majority of the Portsmouth residents are not aware how a system like this benefits them to date which is unfortunate, but the reality is that close monitoring of travel times allow engineers to review routes where slower than expected journey times are being achieved with improvements to be investigated. To date, the solution has been used mainly to the benefit of the traffic engineers in the city to: monitor live journey times during major road works and at large scale events such as “The Americas Cup”, “The Great South Run” or “Victorious Music Festival”, each attracting 50,000+ attendees. Provide traffic data for future planning meetings; view historical data, looking for quieter days/times on the network when planning major road works; and allow traffic engineers to provide clear and understandable data from a 'third party' company to the public, mitigating the risk of any public perceptions that altering of data has been made for more favourable options.

“We consider that the ease of extracting traffic data from the BLIP Systems dashboard is significant to see how time savings are achieved. Selecting the required route, date, time, etc. is very straightforward and simple to understand. Regarding cost savings, one of the biggest is made by triangulating three or more data units, allowing multiple routes to be monitored,” said Lee Gilbert, Traffic Engineer at Portsmouth City Council.

“Portsmouth has really benefited from the accurate data from the BlipTrack installations with a much improved understanding of journey times within the city of Portsmouth. Sensors have been moved occasionally to provide data from new sites where data was previously unavailable. This flexibility has also enhanced the level of confidence that the client has in overall product capability. We have found the ease of installation and setup incredibly simple. On average, it has taken 15 minutes or less to install one unit. The solution is very cost effective and the filter engine provides a robust method for removing the outlier data sets caused by vehicles stopping at shops, for example. There is no doubt that the solution has provided our clients with a level of confidence in better understanding journey times and hence managing the expectations of the travelling public,” said Peter Eccleson, Managing Director at Smart CCTV.

Preben Andersen, Sales Manager at Blip Systems, said: ”We are very happy to be able to effectively gather and provide Portsmouth with reliable traffic data and to be able to optimize processes to benefit the city, its citizens, and ultimately, the environment.”

“In the very near future, following an 18mth monitoring program, we will be making the data available to city employees to use, which will allow us to collect information on how useful the BlipTrack journey time data is to a wider-range group. If positive, then full availability will be made to the public via a link through a new ‘QVision web site’ supplied by Smart CCTV Ltd, encompassing live streaming CCTV cameras, road works information, and more. This information will be on our website: LiveTrafficPortsmouth.com," ended Lee Gilbert, Traffic Engineer at Portsmouth City Council.

Besides measuring and improving traffic in Portsmouth, the solution is successfully employed in optimization efforts at the Port of Dover, and in road traffic in Ireland, New Zealand, USA, Canada, Denmark, Sweden and Norway. In addition, the solution is implemented in more than 25 international airports, including Manchester, Bristol, Dublin, New York, Cincinnati, Amsterdam, Dubai, Genéve, Toronto, Milano, Barcelona, Auckland, Brussels, Oslo, Copenhagen and Helsinki. In recent years, the solution has also been implemented in ports, train stations, ski resorts, amusement parks, and at events all over the world.

About BLIP Systems:
BLIP Systems is a privately-held information technology company with headquarters near Aalborg, Denmark. The company provide data analytic tools to transform traveler flow into value, and creating easy-to interpret decision-making tools of end-users. The in-house designed BlipTrack solution consists of multiple high-tech sensors, a hosted analysis platform and a web-based user-interface. The solution is used to optimize operations and improve traveler experience in transport networks and infrastructures, and ensure optimum revenue within commercial areas. BLIP Systems have an international focus, a strong customer base, and many established partnerships and installations all over the world. The vision and unparalleled expertise is derived from 20 talented employees who strive to provide the highest quality service and solutions.

About Portsmouth:
Portsmouth is the second largest city in the ceremonial county of Hampshire on the south coast of England. Located mainly on Portsea Island, it is the United Kingdom's only island city. Portsmouth is situated 103 km south west of London and 31 km south east of Southampton. The city has a population of 205,400 and is the only city in the United Kingdom with a greater population density than London.

About Smart CCTV:
Smart CCTV Ltd is a privately held technology-based, value-added reseller of IP-based CCTV, video analytics, video incident detection and laser scanning technologies into the Intelligent Transport Systems and high-end security markets. Based near Portsmouth, the company operates in the UK and Ireland.

BlipTrack SensorsSensors mounted at an intersection

Map of PortsmouthRoutes in Portsmouth being measured