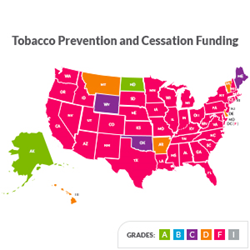 While significant progress has been made in reducing youth cigarette smoking, youth use of other tobacco products, including e-cigarettes and little cigars, is at an all-time high. - Harold P. Wimmer, American Lung Association

Today, the American Lung Association released its 14th annual “State of Tobacco Control” report that finds that the increase in the use of tobacco products other than cigarettes threatens to undermine the United States’ overall progress in the fight against tobacco-caused death and disease.

“While significant progress has been made in reducing youth cigarette smoking, youth use of other tobacco products, including e-cigarettes and little cigars, is at an all-time high,” said Harold P. Wimmer, National President and CEO of the American Lung Association. “With almost a quarter of high school students still using tobacco products, it’s imperative that the states and the federal government take more aggressive action to reduce all tobacco use – the number one cause of preventable death and disease in our nation. And that must start with the release of the regulation giving FDA authority over all tobacco products.”

The “State of Tobacco Control” report documents the progress and failure of the states and the federal government to address tobacco use. The report assigns grades based on whether federal and state laws protect Americans from the enormous toll tobacco use takes on lives and the economy.

The American Lung Association and its partners have called for immediate action by all levels of government to achieve three bold goals:
1.    Reduce rates of smoking and other tobacco use to less than 10 percent for all communities by 2024;
2.    Protect all Americans from secondhand smoke by 2019; and
3.    Ultimately eliminate the death and disease caused by tobacco use.

Assigning annual grades to benchmark the federal government’s tobacco control efforts, the 2016 report assigned the federal government an “I” for U.S. Food and Drug Administration (FDA) regulation of tobacco products, a “C” for coverage of tobacco cessation treatments, an “F” for tobacco taxes and a “B” for mass media campaigns. As of January 31, 2016, the Obama Administration had not yet finalized the rule giving FDA oversight authority over all tobacco products including cigars, e-cigarettes, little cigars and hookah (commonly referred to as the deeming rule). The grade of “I” for Incomplete is assigned because the final rule is expected at any time.

The report celebrates the Centers for Disease Control and Prevention’s (CDC’s) Tips from Former Smokers media campaign, which has helped hundreds of thousands of Americans quit smoking since the ads started airing in 2012. The FDA also launched the “Real Cost” Campaign in February 2014, aimed at preventing at-risk youth from beginning any tobacco use. The report finds yearlong funding for the “Tips” media campaign is vital to continue to help smokers quit.

Tobacco taxes are another proven way to reduce tobacco use especially among youth, according to the Lung Association, yet of the several bills introduced in Congress to increase federal tobacco taxes and level the playing field between federal cigarette and other tobacco product taxes, none were passed.

“State of Tobacco Control 2016” also assigns grades to each states’ tobacco control efforts in four key areas – Tobacco Prevention and Cessation Funding, Smokefree Air Laws, Tobacco Taxes and Access to Tobacco Cessation Treatments. Aside from some notable progress on tobacco taxes in 2015, the states aren’t acting quickly or aggressively enough to meet the three bold goals outlined by the Lung Association and its partners.

Tobacco taxes were addressed by many states this year, and in total, eight states – Alabama, Connecticut, Kansas, Louisiana, Nevada, Ohio, Rhode Island and Vermont – increased cigarette taxes. Nevada was also recognized in the report for increasing its cigarette tax by $1.00 per pack. However, according to widely-accepted research on how tobacco taxes impact smoking rates, many of the other states did not increase cigarette taxes by a large enough amount to reduce youth or adult smoking rates.

Beyond efforts to curb smoking rates, the report also looked at secondhand smoke protections in workplaces. While 28 states plus the District of Columbia have passed comprehensive smokefree workplace laws, no state passed a comprehensive law in 2015 and only one state has passed a comprehensive smokefree law in the past five years. A major victory was scored at the local level, when the city of New Orleans eliminated smoking, including e-cigarette use, in public spaces and workplaces including bars and casinos.

“No one should have to face the harmful effects of secondhand smoke to earn a paycheck,” Wimmer said. “We call on all states to step up and protect citizens from toxic secondhand smoke.”

“We know what works to reduce tobacco use across the nation and on the state level: tobacco prevention programs funded at CDC-recommended levels, comprehensive smokefree workplace laws, high tobacco taxes and full and unfettered access to all treatments proven to help tobacco users quit,” Wimmer said. “What our state and local leaders lack is the political will to implement these proven policies.”

Learn more at http://www.stateoftobaccocontrol.org. For media interested in speaking with an expert about the “State of Tobacco Control” report, lung health, tobacco use and tobacco policies, contact the American Lung Association at Media(at)Lung(dot)org or 312-801-7628.

"State of Tobacco Control 2016" reports assigns grades to states based on tobacco taxes. Tobacco taxes are another proven way to reduce tobacco use especially among youth. Learn more at www.stateoftob