Imagination Playground, LLC, http://www.imaginationplayground.com, creators of the breakthrough play space concept that encourages child-directed, unstructured free play, announced today their Build-A-Thon contest with over 500 prizes being awarded. From February 1 through December 16, 2016, entrants are being asked to submit photos of their “builds” to win. 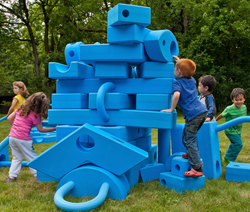 We are excited to be able to provide an opportunity for children to build with our blocks – both digitally and physically – and reward them for their efforts.

Imagination Playground, LLC, http://www.imaginationplayground.com, creators of the breakthrough play space concept that encourages child-directed, unstructured free play, announced today their Build-A-Thon contest with over 500 prizes being awarded. From February 1 through December 16, 2016, entrants are being asked to submit photos of their “builds” to win.

There are two ways to play. Children between ages 2 and 10 years of age can submit photos of as many physical builds or app screen designs as they like. This includes building on Imagination Playground’s 3D Builder app (available for free download on the iTunes App Store or on Google Play.) Entrants can forward screen shots of their designs to enter. Or entrants can physically build with their Imagination Playground Big Blue Blocks at any of their Partners in Play (schools, local family centers, children’s museums, discovery centers and science centers). A photograph of the creation can be submitted to enter.

The prizes include a Grand Prize of an all-expense-paid trip to build at the Imagination Playground Park in New York City and a customized 105-piece set of Imagination Playground blocks. There are 1st, 2nd, and 3rd place prizes for both digital and physical builds – over 500 winners in all. Builders can win for themselves or support their favorite organization (school, church, daycare, community center) by nominating them to receive the playground!

“Our Build-A-Thon contest in 2015 was wildly cheered and certainly exceeded our expectations for participation. The pride on the faces of the children, along with their Big Blue Block creations, made us realize that we had to repeat the contest in 2016. We are excited to be able to provide an opportunity for children to build with our blocks – both digitally and physically – and reward them for their efforts,” shared Dave Krishock, President & CEO, Imagination Playground.

“Introducing children and their parents to our Imagination Playground 3D Builder app and collaborating with our Partners in Play around the country, provides us with a unique opportunity to share the learning benefits of our block play with a wider audience, “continued Krishock.

From a parent’s point of view, the opportunity to involve their children in the contest has become a family activity. “We are just so absolutely thrilled and elated to have won the grand prize that it’s taking us a little time to process it all! I can’t begin to tell you how very happy and excited Caden was at the news; as we all are! It’s all our family has been talking about, and Caden has already been reserving books about New York City from the library in anticipation of his big trip. It seems so fitting for Caden to have won this prize. His ideal day is spent building and creating…we are always saying that he will grow to become an engineer or architect. We are completely overjoyed, and a little overwhelmed!” shared John, father of Caden, the Grand Prize Winner in the 2015 Build-A-Thon contest.

Kristen, mother of Eliana, the 2nd Place Prize Winner (Digital), shared this about her daughter’s win, “Eliana is just so tickled by this and she is so shy and has really come out of her shell to share her experience with the students. They have even added the 3D Builder app to the school iPads. She is going to teach all the students in her grade how to use it via a Promethean board. You have truly helped her find her artist’s voice. We are so thankful.”

Hundreds of Build-A-Thon events are being planned around the country to coincide with the contest. To schedule an event or to find a location to build, reach out to contactus@imaginationplayground.com.

To learn more about how children can enter, contest rules, and to submit an entry, visit http://www.imaginationplayground.com/promotions/build-a-thon.

To download the free 3D Builder app for iOS, visit the iTunes app store at http://bit.ly/3D-APP.