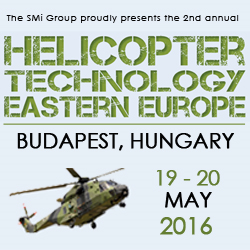 “It is with great pleasure that I invite you to participate in this event" - Major General Bohuslav Dvorak, Former Deputy Chief of the General Staff, Czech Armed Forces (Chairman)

SMi Group reports: In December 2015 it was announced that Czech MoD was looking forward to purchase 12 multipurpose helicopters and two medium size transport aircraft to replace Soviet era Mi-24s and Mi-35s and Yakovlev Yak-40s for the air force. The Czech military procurement strategy is aimed at weaning the Czech military off of Russian-designed and supplied hardware and replacing this materiel with NATO-standard equipment*

Colonel Jiri Vavra, Head of the Air Force Development, Czech MoD, has joined the expert speaker line up for Helicopter Technology Eastern Europe 2016 and will be speaking on Day Two of the Conference on "The Czech Republic's Helicopter Fleet: Training for Future Mission Effectiveness."

In his unique presentation the Colonel will discuss: Fleet size and mission priorities; Training and simulation goals for the fleet; Feedback from recent deployments and Aircrew training - V4 collaboration and interoperability.

For further information on this presentation and to download a complimentary copy of the complete 2-day event agenda including all speakers and their topics, please go to http://www.helicopters-easterneurope.com/prweb

Helicopter Technology Eastern Europe 2016 is designed to unite military helicopter procurement and technology experts with one goal, to enhance existing and future air support operation across air, land and sea. The participants will be the most senior decision makers responsible for modernising and procuring new military helicopters, as well as some of the region's most experienced operators of rotary craft.

“It is with great pleasure that I invite you to participate in this event. Multinational operations still remain reliant on interoperability of approach, communication and systems. Rotary fleets must be modernised and upgraded across Europe and the need for multipurpose aircraft is a priority for many.

"There is therefore a need for a high level meeting that brings together senior military leadership, project decision makers and technical experts alongside the helicopter manufacturers and cutting edge industry solution providers to collaborate on future endeavours that will enhance the security and stability of Central Europe and its neighbouring countries.

Expert Speakers Line up 2016 include:

There is currently an early bird offer available; book by 31st of March to save £200 off the conference price. Military and Government rates available, please visit the event website http://www.helitechconf.com/prweb for further details.