I Love You, Warts And All: Queendom Study Reveals That Authenticity Is Essential To Love And Happiness

A recent study by PsychTests.com and its subsidiary Queendom.com and indicates that people who are not afraid to show their true selves have better relationships and are happier in general. 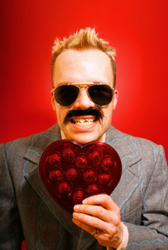 The way to win a person’s heart is to be your true self, quirks and all.

If someone doesn’t like you for who you are, he or she is not the ONE for you.

In the early or “honeymoon” stage of a relationship, couples strive to put their best foot forward. They’ll groom themselves to perfection, go out of their way to be romantic, and may exaggerate a strength or two in an effort to impress their date – just take a look at any online dating profile.

A recent study from Queendom.com, however, suggests that new couples who venture out this Valentine’s Day shouldn’t be afraid to be themselves, even if they have a few quirks or faults. Their research indicates that people who are genuine and straightforward tend to be more confident and happy, compared to those who put on a mask or try to be someone they are not.

Researchers at Queendom studied two contrasting groups of people who took their Big 5 Personality Test - a sample of 3,212 in total:

When researchers compared the groups on factors like happiness, frequency of conflict, and self-confidence, the differences were noteworthy.

Researchers at Queendom also compared the two groups on various personality traits, revealing once again that putting on a mask can take a psychological toll. The Authentic group outscored the Pretenders on several factors, including:

"Pretending to be someone you’re not will almost always backfire, and as our study shows, people who are disingenuous are also likely to struggle with a host of other issues,” explains Dr. Jerabek, president of PsychTests, the company that runs Queendom.com. “Despite doing their best to be perfect or to be the person that they think others want them to be, the Pretenders still struggled with their confidence, and were still not as popular as they had hoped…essentially, they either weren’t fooling anybody or they went too far. So not only is walking around in the guise of a fake persona tiring and suffocating, it also won’t really get you what you want, whether it’s love or popularity.”

“There’s an important lesson here: If you go into a relationship thinking that you have to be someone you’re not because the ’real’ you isn’t good enough, you’re walking on a slippery slope. Most people can sense when someone is lying to them or being fake. The bottom line is if you show your true self, faults and all, you may risk rejection, but it’s better than having someone fall in love with an illusion, particularly an illusion that you would need to keep up for the rest of your life. Don’t be afraid to be yourself. If someone doesn’t like you for who you are, he or she is not the ONE for you.”

Which traits make up your amazing personality? Go to http://www.queendom.com/tests/take_test.php?idRegTest=3891

Professional users of this assessment (therapists, life coaches and counselors) can request a free demo of the Big 5 Personality Test or any other tests from ARCH Profile’s extensive battery: http://hrtests.archprofile.com/testdrive_gen_1

People who are genuine and straightforward tend to be more confident and happy, compared to those who put on a mask or try to be someone they are not.