In a two and a half hour debate in Westminster Hall a cross-party group of UK Members of Parliament (MPs) called on the British Government to take urgent action to press the Pakistan Government to end the persecution of Ahmadi Muslims and other religious groups in Pakistan. 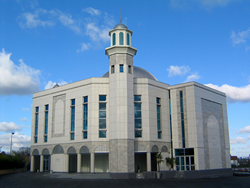 The 11 February debate, called by Siobhain McDonagh MP, featured nearly 20 MPs from across the UK and across all parties, who unanimously denounced the persecution of Ahmadi Muslims and other religious minorities in Pakistan. Siobhain McDonagh noted that the persecution of Ahmadi Muslims was unique in that it was based on Pakistan’s laws that targeted Ahmadis. The MPs were also critical of Pakistan’s blasphemy laws that carried the death penalty and were used to persecute minority groups with impunity and called for action to end the hate speech and hate rallies against Ahmadis in Pakistan.

Siobhain McDonagh MP, who is also Chair of UK All Party Parliamentary Group (APPG) for the Ahmadiyya Muslim Community, UK said:
"I was proud to lead this important debate. The stark reality is that for more than 30 years peaceful Ahmadi Muslims have been targeted explicitly by Pakistan's laws that deny them their right to call themselves Muslims or to practise their Islamic faith - a crime punishable by 3 years imprisonment or by death under the country's blasphemy laws.

"The laws result in hundreds being killed and systematic persecution from the cradle to the grave with Ahmadi Muslims even denied the right to vote.”

MPs also called on the Pakistan Government to release 70-year-old Mr Abdul Shakoor, an Ahmadi shopkeeper from Rabwah who was jailed in January for 7 years under the country's anti-terror laws and anti-Ahmadi laws for possessing copies of the Holy Quran and some religious books.

On this issue Ms McDonagh stated,
“Books inciting violence against Ahmadis are freely available in Pakistan. How can the Pakistan Government justify such injustice? We call on Pakistan to release Mr Shakoor immediately. The blasphemy laws have also fostered a climate of hostility and intimidation against Christians and other minorities who also face horrific violence based on spurious and unfounded allegations of blasphemy. This must end and I hope the UK Government will press upon Pakistan the need to uphold its international obligations and the rights guaranteed by its constitution to give all citizens complete freedom of religion. As a friend and ally of Pakistan we must send a clear message that there is no room for state sponsored persecution and it must act to redress such issues as a matter of urgency."

They also called for the immediate release of Mr Tahir Mehdi Imtiaz who has been held for 10 months without charge on spurious allegations of blasphemy.

Margaret Ferrier MP said:
“In Pakistan, the Ahmadi population are systematically subjected to discrimination that is deeply ingrained in Pakistan’s laws and culture...will the UK Government push the Pakistani Government to provide protection once and for all to the Ahmadi community, whose banner reads: Love for all, hatred for none.”

MPs also noted the horrific persecution of Christians and other minorities in Pakistan.

Fiona Bruce MP said,
“...in today’s Pakistan, minorities—including Ahmadis, Sikhs, Christians, Hindus, Buddhists and Muslims from the Shi’a tradition—face relentless violence, profound discrimination and, in some cases, outright persecution. Christian women, like other minorities, face persecution and discrimination simply because of their faith. The real and present dangers faced by women of non-Muslim faith are much direct and substantial.”

Jim Shannon MP, Chair of the APPG for International Freedom of Religion or Belief, said:
“The level of discrimination against religious organisations and individuals in Pakistan, such as Ahmadis, Christians, Shi’as, Buddhists, Hindus, Sikhs and Jews, is immense... There are many cases of church bombings, mob attacks on Christian communities and rape against women and girls...the killing of some 40 Shi’a Muslims in Karachi in May 2015 marked a new low in sectarian violence that has left Pakistan’s religious minorities fearing for their lives.”

The debate also called for action in Bulgaria, Thailand and in particular Indonesia where this month Ahmadi families were forcibly evicted from their homes in Bangka-Belitung by the local government simply on grounds of faith.

Foreign Office Minister, Tobias Ellwood MP, noted the UK’s “strong, powerful and important relationship” with Pakistan and stated that,
“...the Pakistani constitution discriminates against [Ahmadi Muslims]... They struggle to exercise their right to vote...[and] Ahmadiyya Muslims are denied education for the same reasons. They face arbitrary detention, their literature is banned, their mosques are attacked and, ... their minarets are also destroyed.

Assuring action on this issue Mr Ellwood stated that,
“The Government deplores violations of the right to freedom of religion or belief, wherever they occur. We regularly urge the Government of Pakistan to honour their international commitments and guarantee fully the human rights of all Pakistani citizens.”

Mr Rafiq Hayat, National President of the Ahmadiyya Muslim Community UK said:
“It was an important and timely debate. The persecution of Ahmadi Muslims in Pakistan must end as must the horrific violence against Christians and other minorities. Pakistan must repeal is discriminatory laws that deny its own citizens their basic human rights. I thank Siobhain McDonagh MP for calling the debate and all who contributed – it sent a loud and clear message that such persecution will not be accepted and Pakistan must be held to account. We pray for peace in Pakistan and for the success of the country based on justice and equality for all.”
ENDS

Note:
A full transcript of the debate can be read at http://www.publications.parliament.uk/pa/cm201516/cmhansrd/cm160211/halltext/160211h0001.htm and at http://www.StopThePersecution.org