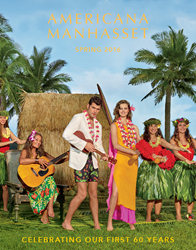 Hawaii was the perfect choice as a location, being that it is a timeless place to celebrate happy occasions. Charles DeCaro

2016 marks the 60th Anniversary of Americana Manhasset, and the Spring campaign launches a year-long anniversary celebration. Hawaii has always been a perfect destination for celebrating important milestones. In fact Americana owners Frank & Rita Castagna celebrated their honeymoon 60 years ago in Hawaii, providing inspiration for this season.

Photographed, produced and styled by Laspata/DeCaro, the campaign was shot in various locations in and around Oahu’s famed North Shore. The pristine beaches and lush, dramatic mountains provide the backdrop to Lindsey and Sean’s fashion-filled getaway, with Sean calling to mind a modern version of a young Elvis in Blue Hawaii. Authentic hula girls and flame throwers are featured, and a full-blown luau was created for the cover image. The campaign is festive and young, with a definitively tropical vibe.

Americana’s Spring Book is direct-mailed to 130,000 targeted households. The images are being featured in national and regional print ads in publications such as The New York Times, T-Styles magazine, The Wall Street Journal magazine and The World Journal newspaper, as well as in various digital media such as nyt.com. For the first time, the campaign will be featured on the outside of the Hampton Jitney with a total bus wrap. The campaign is also being shown prominently throughout the season on Americana’s website, americanamanhasset.com and featured on Americana social media outlets.

In conjunction with the still images, Americana Manhasset has debuted a short film, entitled “Hawaii Six-Oh!” which stars Lindsey and Sean and captures the fun spirit of the campaign set to a tribal beat. The piece will be featured in digital advertising as well as front and center on Americana’s website, along with an entertaining and fast-paced behind-the-scenes video of the photo shoot.

“Hawaii was the perfect choice as a location, being that it is a timeless place to celebrate happy occasions,” said Charles DeCaro. “It was ideal for the launch of Americana’s 60th Anniversary, but it also made sense with the collections this season, many of which have a kind of island sensibility. As always, while we had a clear editorial voice and a strong vision for this campaign, it is the fashion and the designers’ messages that remain the focus. We shoot a singular and appropriate photograph for each brand, from Hermès, Gucci and Céline to Tory Burch, Vince and Zimmermann, but each image also works as part of the whole.”

Additional and/or high-resolution images from the 2016 Spring campaign are available upon request.