NCWM is releasing a new series of videos that will raise public awareness of the activities of weights and measures inspectors that help assure consumers that they are getting what they pay for. These videos are among a set of tools NCWM is developing to increase support for weights and measures programs. 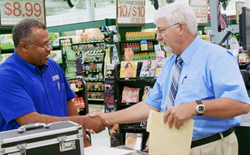 Weights and Measures at work for you in the Supermarket

We want shoppers to be confident that at the grocery store and retail outlets they are getting what they pay for. This is just one way weights and measures touches your life every day.

Thanks to a new series of videos, consumers will be able to see inside the world of weights and measures inspectors as they go about their daily duties of securing equity in the marketplace. The National Conference on Weights and Measures (NCWM) has release the first in the series titled, “Getting What You Pay For at the Supermarket”. This video just became available on YouTube with more to come in the near future, and the timing is ideal with Weights and Measures Week being celebrated across the country March 1-7.

Additional videos in the series will focus on inspections of scales, fuel dispensers, verifying the net contents of packaged goods, and motor fuel quality. The videos are designed to raise public awareness and appreciation for the things weights and measures officials are doing. As the video states, “We want shoppers to be confident that at the grocery store and retail outlets they are getting what they pay for. This is just one way weights and measures touches your life every day.”

NCWM credits the North Carolina Department of Agriculture & Consumer Services for taking the lead in development of this first video. NCWM’s Associate Membership Committee has pledged matching funds with NCWM to create the remainder of the series. Associate members represent companies that are regulated by weights and measures and have a great appreciation for their ability to compete on a level playing field. Weights and measures agencies have a history of strong support from regulated industries, demonstrating their understanding that, without those inspectors, equity would not exist for competing businesses or consumers.

In addition to the videos, a task group at NCWM has been accumulating other types of tools that agencies can use to demonstrate the positive impact they have in their communities. Tools include economic census data, impact analysis forms, reporting templates, and industry testimonials.