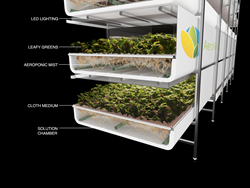 AeroFarms is able to grow the same seed as the big conventional field growers, with 95% less water in almost half the time.

Most leafy greens in the United States are grown in the Salinas Valley in California travelling thousands of miles. We can grow greens with more flavor using 95% less water just minutes from the millions of healthy eaters in the New York Metro area.

On February 26, AeroFarms will present its success in urban farming at commercial scale to the 92nd annual USDA Outlook Conference in Washington, DC.

Consumers are demanding local food in their grocery stores. In fact, a recent study found that the word “local” is now a better motivator than “organic” in produce purchases. AeroFarms is able to grow delicious baby leafy greens just 20 minutes from New York City, in Newark, New Jersey, with 75 times more productivity than a traditional farm.

Because AeroFarms uses vertically stacked growing beds, up to 12 levels high, they use less than 1% of the space required by conventional growing, a precious commodity in densely populated urban areas.

“Our mission is to build responsible farms, to enable local production at scale and grow safe, delicious and healthy food,” said AeroFarms Chief Marketing Officer, Marc Oshima, who will present to the USDA on Friday. “Most leafy greens in the United States are grown in the Salinas Valley in California traveling thousands of miles. We can grow greens with more flavor using 95% less water just minutes from the millions of healthy eaters in the New York Metro area,” continued Oshima.

In Spring 2016, AeroFarms will open its new 70,000 sq. ft. global corporate headquarters in Newark, NJ, which will be home to the world’s largest vertical farm - capable of producing two million pounds of leafy greens per year. The growth of AeroFarms will create more than 40 new jobs in the next few months on top of an existing team of 60.

In addition to serving the New York Metro area, they have immediate plans for multiple farms in major U.S. cities and on three other continents, spreading truly sustainable agriculture around the world.

About AeroFarms
Founded in 2004, AeroFarms® is on a mission to fundamentally transform agriculture by building, owning, and operating indoor, vertical farms that grow flavorful, safe, healthy food in a sustainable and socially responsible way. AeroFarms patented growing systems make year-round harvests with peak flavor possible while disrupting the traditional distribution channels that lead to massive carbon emissions and food waste. A leader in the circular economy movement, AeroFarms was the first agriculture company to be selected for the Ellen MacArthur Foundation Circular Economy 100.